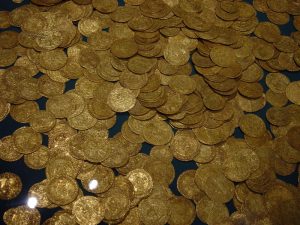 This article presents a direct adaption for 3.5 Edition/Pathfinder Roleplaying Game of the new article in Kobold Quarterly #14 introducing a new type of magic for 4th Edition that arises from the accumulation of treasure.  That monster’s treasure hoard is now just as deadly as it is precious! Check out the latest issue of Kobold Quarterly to learn more about this amazing new take on magic and gold. [Part 1]

Long exposure to the reality-bending effects of precious metals warps the lands around a hoard.  The simplest way to model these environmental effects is with a generalized system of planar traits.  Choose one or more of the hoard owner’s important characteristics—alignment, subtype, or the like—and make the nearby region predisposed to creatures of the same type… You will also have to choose one or more opposing characteristics.  In some cases this is straightforward—alignment- and element-based characteristics already have defined opposites—while, in other cases, you may have to refer to the hoard owner’s nature to make the choice.  For instance, a wealthy fey lord might cause his demesne to become native-primed, imposing a penalty to extraplanar creatures while a master artificer might create a construct-primed lair inimical to normal animals and plants.

Refer to the hoard magic level to decide the number of characteristics applied to a region and the strength of the environmental predisposition:

For a more powerful and unique effect, consider having a strong predisposition impose a −2 penalty to Strength-, Dexterity-, or Constitution-based checks.  As these penalties directly affect the combat abilities of the entire party, they are significantly more powerful.  Additionally, because so much of the mathematics of combat depend on these ability scores, they involve quite a bit more bookkeeping.  However, they distinguish the feel of hoard magic from that of planar adventures, and a Constitution-based penalty, for instance, would be very appropriate for the withered lands of a fabulously wealthy lich-king.

For the most impact during play, hoard magic should bring some new combat options to the table.  To implement this, allow hoard owners to cast spells (of the highest level available to the PCs) or use spell-like abilities (of a monster of the same equivalent level as the hoard magic) as a swift action 1/day or more.  Use the following table as a guide for the number of powers and their frequency:

Try to choose spells or spell-like abilities that match the creature’s theme but that the hoard owner does not normally have access.  Otherwise, the effects of hoard magic will be hard for the players to notice.  For instance, a mummy lord priest who casts insect plague would raise few eyebrows, while one who follows a flame strike with cloudkill will strike some fear into the hearts of the players!

Hoard magic is meant to be obscure, so use it sparingly to enrich memorable encounters.  If the players succeed, they might choose to reap the benefits of hoard magic for themselves.  Let them!  The story possibilities engendered by a large, tempting hoard and the opportunity cost of leaving so much wealth in sterile coins more than compensate for any gain in power by the PCs.

Bring a dragon’s mound of coins to life by giving it magical power!

Check out he hoard magic article in Kobold Quarterly #14.