Skip to content
Home / Delve into the Depths in the Kobold Blog / KotM Fight! Zaglossus 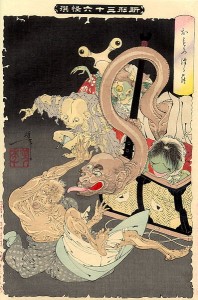 Welcome to the King of the Monsters Contest finals: the zaglossus is finalist 10 of 10. These submissions are left almost entirely as they were received with the exception that all submissions have had minor alterations for proper spelling (not grammar), formatting, and the addition of an image. Let the fight commence!

This dusky quadrupedal creature is powerfully built and bristles with long vicious quills. The monster’s headless torso bleeds an oily, viscous slime from the clenched orifice between its shoulders. A muscular black tentacle darts out from the weeping hole, dripping with dark mucus and lined with sharp teeth.  A floating halo of disembodied eyeballs surrounds the creature…

SPECIAL ABILITIES
Animate Organs (Su): After one round of soaking in the Zaglossus’ potent mucus, removed facial features animate under the creature’s magical control. This control lasts for up to 14 days after the Zaglossus last tends to the organ, until the body part is destroyed or reattached by its original owner. Reattaching a body part is a full-round action that provokes an attack of opportunity.

Augmented Critical (Ex): A Zaglossus’ tentacle is razor sharp and threatens a critical hit on a roll of 18-20.

Faceless (Ex): A Zaglossus has no natural ability to see, hear, speak or breathe. It relies fully on animated organs to achieve these tasks.

Steal Features (Ex): On a successful critical hit with its tongue, a Zaglossus wiggles its slimy proboscis into a creature’s face, removing a part.

Zaglossi are a cursed race of alien monstrosities which hatch headless from leathery eggs. During its first desperate moments to avoid asphyxiation, the infant creature steals organs from a sacrifice proffered by its parent. Zaglossi spend the rest of their lives collecting an eclectic mix of organs from as many different creatures as possible, delighting in the torment inflicted on the maimed. A Zaglossus’ diet consists exclusively of bones, and teeth are considered a special delicacy.

The Zaglossus’ thick and viscous slime provides the creature with incredible healing and a magical link to organs suspended within. The healing powers of the slime are such that an organ can be reattached to a creature merely by pressing the severed part to the bloody stump. The mucus’ alien chemistry is disrupted by contact with silver.

Zaglossi are solitary creatures that reproduce asexually, with genetic diversity drawn from their prey’s captured organs. Infant Zaglossi are independent after their first meal and soon colonize a new underground lair some miles away. Zaglossi generally lair near humanoid settlements, observing their victims from afar through their servitor eyes before ambushing prey from underground.

Towns under the depredations of a Zaglossus often leave their children’s infant teeth in a water-filled ceramic bowl at night as tribute for the beast. In the morning, the townsfolk use the slimy water as medicine to heal all manner of ailments.