Skip to content
Home / Delve into the Depths in the Kobold Blog / KotM Fight! Polydoros Kin 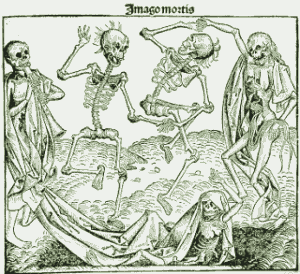 Welcome to the King of the Monsters Contest finals: the polydoros kin is finalist 6 of 10. These submissions are left almost entirely as they were received with the exception that all submissions have had minor alterations for proper spelling (not grammar), formatting, and the addition of an image. Let the fight commence!

To what actions do you not drive mortal hearts,
accursed hunger for gold!

According to Vergil’s Aeneid, Polydoros was a Trojan envoy betrayed and murdered for gold. Aeneas later unwittingly disturbs Polydoros’s remains by pulling up myrtle. As Aeneas struggles with the shrub, blood begins to issue forth from it, and Polydoros reveals himself. Although Polydoros himself only wished to be left in peace, there are others like him who lie, enraged, in wait, hoping to wreak vengeance on any living being unlucky enough to stumble upon them…

Polydoros Kin appear much as they did at the time of their murder; their bodies, often mangled, bear the wounds inflicted upon them, but are particularly fetid and grotesque because they fester and rot unceasingly.

Polydoros Kin retain dim knowledge of their mortal lives, at least enough to recall their hideous fates. Their fury builds for decades or centuries, and is stoked to a roaring blaze if their rest, such as it is, is disturbed. They typically speak whatever languages they spoke in life, though their speech, over time, grows revolting to mortal ears. A typical Polydoros Kin begins its journey as a robbed and dying man, or as a mutilated corpse left to rot on a roadside or in a copse. Whether a the body is interred in a shallow grave by a merciful passer-by or covered gradually by debris and forgotten by time, it is typically discovered accidentally some time later.

The secrets of creating Polydoros Kin are little-known, at least to men. These vengeful beings, fortunately rarely encountered, seem to attain undeath after they are murdered for gold. Some speculate that Polydoros Kin are animated by whim of the gods, others that some yet recondite dark magic imbues them with undying furor.

A Polydoros Kin relies heavily on the element of surprise to destroy its enemies. When its rest is disturbed, a Polydoros Kin bursts forth from its earthly sepulcher to maim and murder. Polydoros Kin which destroy their enemies are said to return to their tombs to await further opportunities to wreak vengeance on the living.

Degenerate Speech (Ex) Poisoned by hatred and perverted by long years of isolation, the speech of a Polydoros Kin is awful to hear. Those hearing a Polydoros Kin’s wretched utterances must make a DC 14 Will save (the save is Wisdom-based) or be shaken for 1d4 rounds.

Revolting Fetor, Horrifying Form (Ex) A Polydoros Kin’s body exists in a perpetual state of decay. As a result, it continuously emits an overpowering death odor which most humanoids find unbearable. A Polydoros Kin’s appearance is likewise unspeakably hideous, a nightmare of rotting, maggot-ridden flesh and eternally festering wounds. Once a Polydoros Kin bursts forth, all living creatures within 30 ft must who can see or smell it must succeed on a DC 16 Fortitude save or be nauseated for 10 rounds. The save DC is Constitution-based.

Sense Interlopers (Su) Polydoros Kin possess a preternatural awareness of the area surrounding their place of burial. They can sense intelligent life within 30 ft, including approximate number of life forces, and can determine when a target is within appropriate range for a surprise attack (within 10 ft). Polydoros Kin are aggressive, lashing out at intruders who enter their territory as soon as they can launch an effective surprise attack.

Surprise (Ex) A Polydoros Kin can burst from its burial place as a free action, and without provoking Attacks of Opportunity.

Victim’s Requital (Ex) Since Polydoros Kin were victims of violent crime motivated by avarice, ostentation drives them into a frenzy. After bursting forth, a Polydoros Kin targets up to 2 combatants displaying material wealth. A Polydoros Kin receives a +2 to hit and damage against these targets for the duration of combat.