Skip to content
Home / Delve into the Depths in the Kobold Blog / Ask the Kobold: Resolving Spells 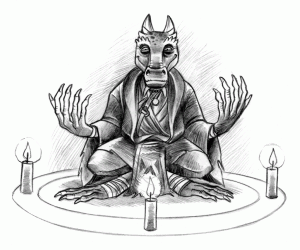 (This week’s column uses 3.5E rules. The next one, however, will be the first to use the Pathfinder Roleplaying Game rules.)

Spell descriptions contain a great deal of standardized nomenclature that helps explain what each spell does. The questions presented here involve a few of them.

Aiming a spell involves choose exactly where a spell will work its magic. The game breaks spells down into a few broad categories that govern just how the spell is aimed…

Targeted Spells. The header information for these spells contains the word “target.” When a spell has a target, you must designate a creature, object, or some other thing where the spell will take effect. You must be able to see or touch your target. Additional information in the spell’s header explains what sorts of targets you can choose.

Effect Spells. These spells create something tangible in the game world. When casting such a spell, you usually must specify exactly where the tangible effect appears (sometimes you don’t have a choice). You can simply designate the place if you can see it; otherwise, you must define it somehow: for example, 10 ft. straight ahead. The rules for line of effect restrict the locations you can choose, as will the spell’s school (sometimes). Alas, exploring either subject would require a column of its own.

Area Spells. These spells loose magic that fills a space that conforms to one of several standard shapes. The magic might take the form of an energy discharge, vapors, or possibly something more solid. When aiming an area spell, you choose some location where the spell originates. As with an effect spell, you must see the point of origin or specify it in some way.

Q: I’ve been involved in a long debate over how the contingency spell works.

The minds on one side hold that a contingency spell’s trigger condition must be something that comes into contact with the caster’s body. The rules for aiming a spell would seem to support this idea; to aim a spell you must specify a target point or touch the target and contingency is targeted.

The other side says contingency spell could have a trigger based on conditions that occur at a distance from the caster, but that distance must be handled by GM fiat because the rules and the spell description don’t speak specifically on the matter.

So, how close must the triggering event be for a contingency spell?

When you cast a contingency spell, you also cast a second spell that takes effect when some condition you specify occurs. The spell description sets some limitations on what that condition can be, and contact with the caster’s body isn’t one of them. The condition need only be clear and not convoluted. The spell the contingency brings into effect, however, must be one that affects your person.

A common contingency spell is casting a feather fall spell if you fall more than 2 ft. That’s clear and uncomplicated, but it doesn’t involve anything in contact with the caster’s body. However, it does involve the state of the caster’s body, and this, I think, is the key here.

The triggering condition for a contingency spell must be something that conceivably affects or involves the caster in some way. It also makes sense that the condition must make the triggered spell relevant in some fashion. You cannot, for example, make a fly spell contingent on an earthquake occurring on the other side of the world (the so-called “butterfly effect” not withstanding), nor could you make a feather fall spell contingent on you feeling cold (because feather fall can’t help you deal with that event). It’s worth noting here that you need not be aware of a contingency spell’s trigger unfolding for the contingent spell to take effect. If you set a valid condition the contingent always triggers in response to that condition, whether you are aware or not, or even if you want it to do so or not.

“But I was so much older then…”

Is this an oversight? Or a deliberate change to rein in the spell’s power?

While I generally advocate sticking closely to the rules when they’ve defined something, that’s not quite possible here.

By definition, a negative level gives a creature a -1 penalty on attack rolls, saving throws, skill checks, ability checks, and effective level (for determining the power, duration, DC, and other details of spells or special abilities). In addition, a spellcaster loses one spell or spell slot from his or her highest available level, and negative levels stack. That is where the enervation spell’s list of negative level effects end.

Negative levels from an enervation spell don’t quite fit the definition. They don’t last 24 hours and there’s no chance for permanent level loss. In light of that, it’s not much of a stretch to conclude that they also don’t reduce the subject’s hp and don’t impart temporary hp to the spellcaster either.