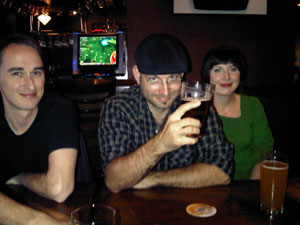 Like all good adventures, this one started in a bar.

It was the day before PaizoCon 2011 begins in Bellevue, and Wolfgang Baur was hosting a get-together of creatives at the upstairs loft of the Rock Bottom Tavern in downtown Bellevue. While most of the regulars at the bar were cheering the NBA championships (and later listening to a fairly bad cover band), the Open Design Krewe pushed together a staggering number of tables so the 20–25 or so Deep Geeks could talk about games, gaming, and the Open Design product. More after the jump.

Wolfgang Baur was holding down the center of the table, but also present were Brandon Hodge, Jeff Grubb, the mighty Stan! Brown, Adam Daigle, layout guru Crystal Frasier, artist Chris McFann, and Matt Forbeck as a late arrival. Imagine about a half-dozen alcohol-fueled nerd discussions, and you have the small riot that was staged in the upstairs loft.

Beers were quaffed! Nachos were consumed! Old games were exhumed! Midgard! Art! Vril batteries! Kobolds! And a good time was had by all (at least, until the cover band showed up).

Gallery for the Kobold Freelancers Meeting at PaizoCon 2011