Skip to content
Home / Delve into the Depths in the Kobold Blog / Interview with Southlands Cartographer Anna Meyer, Part Two 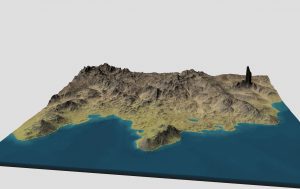 Yesterday, we posted the first part of a two-part interview with Anna Meyer, who created some gorgeous maps for the Southlands Campaign Setting! You can read about (and see) her process in the second part of this interview.

What were some of your highlights working on the Southlands maps?

The biggest thrill with a project like Southlands is to be part of a great team creating something together! To be inspired by the others’ great creativity while trying with my work to match their stories and the other content can often lead to frustration staring at unsatisfactory previews, but then there are the times when things work and the results start to appear on your screen. When you find that desert hideout long forgotten, or a stretch of coastline that stretches into the fantastic, that makes my job worth every hour of tediousness. Textures and the terrain looking the way I want is a great feeling that even after more than a decade gets me carried away at times.

How about the challenges?

The hardest decision for me is to set the limits when it comes to details and scale. In the ideal world, I would just go on and detail every nook and cranny of the whole continent in real scale. There are two big problems with that approach—the first one being time. It would take a lot of work indeed to make a continental map with every feature half a mile so in it. The other consideration is the final form of the map—in this case to be printed as a poster and in pieces on pages in the hardcover. This means that anything smaller than 25 miles or so would only be a dot on the map. So one of the shortcuts I had to take was to make some features bigger than they really are. Mountains are the most obvious example of this. A chain of mountains a hundred miles across are represented as a single range of peaks. In reality there would be several with hundreds of large and small ones. This is a standard trick in fantasy maps: terrain features are more to be seen as symbols rather than actual depictions of the terrain. To find the right balance for each project is often the toughest part of the job.

To make this even more complicated, I signed up to make one of my first city maps. For it to feel more authentic, I wanted it to be part of the terrain. So while I was working on the continent base done in real scale, I detailed the Per-Bastet area with the city details included, so I could work out what it looked like. The city chapter and layout was expertly done by Ted Reed so I didn’t want to let him down.

After I had the surrounding terrain done in real scale, I saved a copy for future use. Then I shrank everything down to around 25 percent of the real scale and worked on the rest of the continent at that reduced feature size. I use the term “feature size” to not confuse it with scale that is different; this is done to make the map look better at the scale it’s being printed. To make sure of this, I make a few test renders, each taking up to six hours or so since I work in double to four times the final resolution in case a need for detailed enlargements comes up later and to make sure things aren’t pixelated from enlargement.

If the renders look good, I send them to the others and then we work out what needs to be changed. There are always things that need to be changed, and to get another view on things is a very important part of all my mapping projects. As a person working from home, it makes it both more interesting and is a sure boost to the results. For those of you who consider a career as a freelance artist, get ready to have your work constantly critiqued. It is a vital part of your work!

Then comes a boring and tedious part of my job: waiting for renders to finish. It’s as much fun as watching paint dry, and it ties up your computer completely. To improve my efficiency, I will soon have a computer dedicated to just this task, so I can work on the fun part of symbols, text, and final touch-up.

What is your favorite map you did for Southlands . . . and why?

There is one place that became special for me: the Black Spire! Thanks to a fractal freak outcome that normally would have been filtered out, a pillar rose miles up into the sky. It looked cool so I kept it. I’m not sure if there was a Black Spire in the story that got placed there or if that part was written in afterward. But I liked how the area looked and kept on tweaking it as a side project. Now I’m trying to turn it into a detailed epic location. It became a location on the final map, which I’m proud of!

What happened to my side project, you wonder? It became one of Southland’s many forgotten stories maybe to be told some time, but there are only so many pages in a book….

With the help of a great team, a lot of hard work, and a bit of luck, a map for you to make your very own has come to life. I hope it will help you along on many adventures to come!

You can see the finished versions of these maps in the Southlands Campaign Setting!