Skip to content
Home / Delve into the Depths in the Kobold Blog / Adopt-a-Soldier Update: Q&A With Matt James 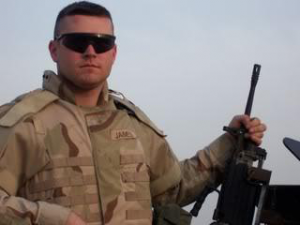 Thanks to everyone who entered the Adopt-a-Soldier Holiday Contest and to the many others who helped spread the word. Your efforts doubled the number of Adopt-a-Soldier sponsorships in less than a month—so if you’re in the military, there’s a Kobold Quarterly gift subscription waiting for you right now. Head over to the product page and sign up!

We’ll be announcing our Grand Prize winners in the second week of January. One of those prizes is an upcoming 4th Edition D&D sourcebook by Matt James called Soldiers of Fortune: War and Military Adventure in a Fantasy World. Matt is a game designer and author who received the Bronze Star and Purple Heart for his service in the United States Army. We asked him to tell us about his experiences as a soldier, and what you can look forward to in Soldiers of Fortune…

How did you come to enlist, and where did you serve?

I enlisted in April of 2003, shortly after the U.S. invaded Iraq. At that point, I was a 21-year-old who needed purpose and direction in life and wanted to serve my country as my father did before me (and so forth, going back six generations). Originally, my intent was to go into a technical field and use the experience to fuel a career in information technology. However, once I got a fair taste of military life, I was hooked! In late 2003, I volunteered for airborne school in hopes of becoming a U.S. Army Paratrooper which became a reality when I was shipped off to complete it in February the following year. I was subsequently assigned to an airborne unit at Fort Bragg and enjoyed an exciting year of jumping out of planes and the pride associated with wearing the coveted maroon beret.

Would you tell us about the experience that led to your being awarded the Bronze Star?

In April of 2005, I was on my way back to my unit after 2 weeks of R&R. My sergeant and I were at a transit point at Camp Victory in southern Baghdad, awaiting a helo (helicopter) to our unit. Early in the morning, we were violently awoken by the sound of a gunshot outside our tent. We jumped out of our cots and worked quickly to secure our weapons and try to assess the situation. As I approached one of the exits, I heard the screams of someone outside, calling for assistance.

When I looked out, he told me that someone had been shot and that they needed help immediately. I ran over to his tent as quickly as I could. This particular tent was occupied by a marine platoon that had just got off of a patrol. Inside, it was smoky and smelled of sulfur.

The gunshot we had heard was actually a negligent discharge on the part of another marine in their unit: a negligent discharge is when someone does not properly remove live ammunition from their weapon and it fires when handled. This was a serious situation, and the marines were understandably panicking. I was still unsure if anyone was injured until I heard them saying, “Holy sh**, he was f******* shot, man!” Who was shot? I couldn’t tell. I asked, “What f****** weapon went off!?”

The young marine pointed out a .50 CAL machine gun that lay on a vacant cot nearby. The .50 CAL is the largest machine gun we use on mounted patrols and is extremely feared for good reason. This weapon is often used to disable vehicles, or even shoot through the walls of strongholds. I just couldn’t process that it had shot anyone in this tent. The only thing that looked out of place was a single marine who was sitting up in his cot with his headphones on. As I looked at him amid the blur of activity around me, his face turned ghost-white as his eyes veered straight up…

The words I am scribing right now cannot express the utter chaos of the situation, nor its severity. The gruesome details, I have decided to leave out of this answer, but even looking back now, the memories seem more like a movie than a real event. All of the blood, globs of flesh, and internal organs will more than keep my mind occupied for the rest of my life.

One month later, while I was recovering at Walter Reed Army Medical Center in Washington DC from an IED ambush that left me permanently disabled, my commander flew in from Iraq to award me the Bronze Star medal for my actions on that fateful day in the smoky tent. The young marine survived those wounds because of the quick reaction we provided. He is the only person to have ever survived a direct shot to the torso from that type of weapon. He, too, is disabled but is living a full life with his family back in the United States. We exchange e-mails from time to time but, for the most part, have moved on to our normal everyday lives.

Tell us about gaming in the Army—what games did you play, where, and with whom? What role does gaming play in the life of a soldier?

I can’t speak for the entirety of the U.S. Army, but gaming does exist and is not as uncommon as many would believe. RPGs were a huge influence on me growing up, and I quickly learned that I wasn’t the only one out there. I remember playing D&D 3.0/3.5 in the barracks at Fort Bragg with other soldiers back in 2004 and even kept a stash with me while in Iraq!

Gaming played an important part of my life as a soldier because it is always the best way to forget the stresses that come with the job. It also allowed us to come together and do something that took our minds off of being away from family and friends. This was very important, and it is the reason I feel role-playing is a vital tool for living a healthy and creative life.

How did you first hear about Kobold Quarterly?

I first heard about Kobold Quarterly when I was surfing the internet looking for other gaming products. When I saw that it was a print magazine that featured many useful articles for my D&D addiction, I was hooked! I often missed getting magazines in the mail and looking at all of the articles. There is something to be said for the experience of reading print magazines, and I was ecstatic that Kobold Quarterly came around.

How do depictions of the military in most RPGs match your actual experience in the Army?

Well, there are many underlying things that match up, such as honor, integrity, and commitment. These things are core to the values of soldiering, and I think they translate well to fantasy depictions. Otherwise, I think it is very hard to match it up to the real world unless the author truly understands the military. In gaming, I often get to do things that I could not otherwise do in the real military and vice versa. Though I tried often, I just could not summon Mordenkainen’s Sword ;)

Your upcoming 4th Edition D&D sourcebook Soldiers of Fortune is one of the Grand Prize items in the Adopt-a-Soldier holiday contest. What can players and DMs expect to find within its pages?

This book has truly been a labor of love. PCs will find many new options for 4th Edition characters that will let them explore the mercenary profession. GMs will find many rich new opportunities to expand their campaigns and even a sample adventure to get things started. I have taken many of my real-world experiences and translated them to this book, something that I hope others enjoy. Whether it be awesome new powers for most of the classes, or a new magic items that allow you to reward your PCs in-game or out (medals and awards), everyone is sure to find something of use in Soldiers of Fortune.