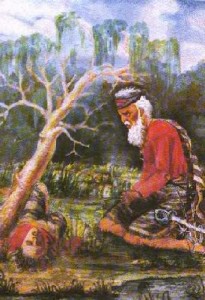 If the gods and the mortals that worship them had their wish, each and every one of the deceased would receive a proper burial. None would be left to decompose, face down, in sloughing mud or shifting sands. None would have their naked limbs picked at by the myriad scavengers and ghouls that roam the barrows just beyond the castle walls.

None would slip through the gates of the Netherworld forgotten, dishonored, or unchristened.

Sadly, this is not the case.

Cadavers that are not embalmed or preserved undergo a grotesque transformation as the processes that once sustained life slow to a halt. Among the most outwardly unnerving of death’s ravages, often recalled with a chill by veteran warriors, is the bloating of a corpse: the result of a buildup of noxious fumes within the decaying body…

Occurring mere days after a creature’s death, the gas is a sickening composite of sulphur, visceral fluid, and congealed, fermented blood. Catalyzed by the bacteria that dwell in the creature’s innards, the gas wells up, pushing the blackened organs against the skin and out of the body through any route. The immense pressure causes the corpse to bloat, and through small lacerations, the body begins to leak clotted bile, bodily waste, and stagnant blood. After a few hours or days, depending on conditions, the gas escapes the body, and the process of decomposition marches inexorably onward.

This gaseous buildup is little more than nauseating in humans and demi-humans. However, magic, alien physiologies, and elemental energy cause the gas in many monsters to take on fantastic properties that prove dangerous to dungeoneers should the bloated corpse be punctured by a misjudged crossbow bolt or the wild swing of a sword. This hazard is referred to as cadaver gas.

A stray arrow pierces the belly of the slain creature, causing a plume of noxious corpse gas to erupt from the wound.

The decomposing recent corpse of a monster you choose bloats from gasses that build up inside of it. The gas bursts out from the cadaver if punctured by an attack. The hazard occupies a 1-by-1 square area if the monster is Small or Medium, a 2-by-2 square area if it is Large or Huge, or a 3-by-3 area if it is Gargantuan.

Perception
No check is needed to notice the bloated corpse
Additional Skill (Heal)
DC 10 + 1/2 level—You understand that the corpse is filled with necrotic gas that may be harmful if suddenly released
Additional Skill (Arcana, Dungeoneering, Nature, or Religion)
DC 15 + 1/2 level—You recognize the effects of the hazard (the skill for this check depends on the knowledge skill associated with the monster used for this hazard)
Trigger When a melee or ranged attack misses a target adjacent to this hazard, it activates; the hazard is also triggered if it is included in a blast or burst

Attack
No Action            Close burst 1 (small, medium), burst 2 (large, huge), burst 3 (gargantuan)
Targets Creatures in burst
Attack Level + 1 vs. Fortitude
Hit The target suffers an effect based on the monster used for the hazard. Sample monsters and their effects are listed below:

◊ Adjacent to the hazard, you can neutralize it with a DC 15 + 1/2 hazard level Heal check (if this check fails by 5 or more, the hazard is triggered)

◊ Dealing any amount of damage to the hazard triggers it, after which it is destroyed (AC and Reflex of 7 + 1/2 hazard level)

The GM is encouraged to create variants of the cadaver gas hazard using monsters not listed here.

Because this hazard has such a limited life—a few hours to a few days, at most—it is rarely exploited by dungeon lords. Most creatures instinctively avoid corpses filled with cadaver gas, though carrion crawlers appear drawn to it.

Rakshasas are rumored to collect cadaver gas when able, trapping the noxious vapor in enchanted leather pouches to inhale later during inscrutable rituals.