Skip to content
Home / Delve into the Depths in the Kobold Blog / KotM Fight! Grave Linnorm 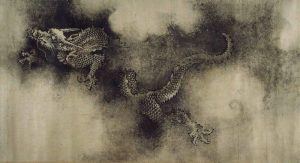 Welcome to the King of the Monsters Contest finals: the grave linnorm is finalist 3 of 10. These submissions are left almost entirely as they were received with the exception that all submissions have had minor alterations for proper spelling (not grammar), formatting, and the addition of an image. Let the fight commence!

Rising from the gruesome devastation is a serpentine monster of truly horrific proportions. Scales the color of tarnished and rusting mail flake from the creature’s coiling hide, while a hot charnel stench wafts from its gaping mouth. The monster roars as it takes to the air, shaking loose a cloud of noisome flies and putrefying flesh from its loathsome flanks…

One of the rarest and most terrifying linnorms to ever exist, the grave linnorm haunts the site of great and bloody battles, horrible massacres, or graveyards and mausoleums with a long history of violent death or necromantic meddling. More powerful than even the feared tarn linnorm, grave linnorms are often found with plague zombies or vampires that they have created with their deadly breath or diseased bites.

While none but the most foolish would ever willingly approach a grave linnorm, their knowledge of the afterworld is legendary, and many heroes have sought out these monsters to secure some lost piece of lore or hidden secret about the gods or powerful undead menace.

SPECIAL ABILITIES
Breath Weapon (Su) Once every 1d4 rounds as a standard action, a grave linnorm can unleash a 90–foot cone or 180–foot line of deadly withering energy, dealing 25d8 points of damage to all creatures struck (Reflex DC 35 halves). Any creature struck by this withering energy must also make a DC 35 Fortitude save or take 2d8 points of Dexterity damage and become nauseated for 2d6 rounds by the horrific stench. If a creature is slain by the withering breath it animates as a plague zombie (see the Pathfinder RPG Bestiary for details) of the appropriate size and Hit Dice on the following round. The plague zombie is under the control of the grave linnorm, and the grave linnorm can control a maximum of 125 Hit Dice of undead at any one time. The save DC is Constitution-based.

Death Curse (Su) When a creature slays a grave linnorm, the slayer is affected by the curse of undeath.

Disease (Su) Linnorm Blight: Bite – injury; save Fort DC 35; onset immediate; frequency 2/day; effect 1 negative level and 1d8 Con drain; cure 4 consecutive saves; The save DC is Constitution-based. Any creature slain by linnorm blight is transformed into a vampire under the grave linnorm’s control on the following round. Any vampire created in this fashion count towards the total number of undead that the grave linnorm can control.

Freedom of Movement (Ex) A grave linnorm is under the constant effect of freedom of movement, as the spell of the same name. This effect cannot be dispelled.

True Seeing (Ex) A grave linnorm has true seeing, as the spell of the same name. This effect cannot be dispelled.