This installment, you get a break from graphs and formulas—though not entirely. In honor of Thanksgiving, I had to include some pie charts. Instead of plotting trends, however, this time we count how often certain concepts occur throughout the Monster Manual, to help you get a handle on whether they’re common, uncommon, or rare.

* Not counting Multiattack, which by itself appears 206 times (48% of creatures have Multiattack).

Remember that those 932 actions are distributed among 429 stat blocks.

Of the Monster Manual stat blocks, 92 creatures have Recharge attacks.

Also, 67 creatures are spellcasters or have spell-like abilities.

Astute readers have already noted that 47 + 22 = 69, not 67. The discrepancy comes from the drow mage and drow priestess of Lolth, who have both abilities and so get counted twice. The drider has a variant that gives it Spellcasting in addition to Innate Spellcasting, but variants aren’t included in this count.

Of the 47 innate spellcasters, 81 percent use Charisma as their spellcasting ability.

Of the 16 spellcasters (not including NPCs), 62 percent use Wisdom as their spellcasting ability.

Again there’s an extra. This time it’s the bone naga, which can use either Intelligence or Wisdom, depending on which type of naga it was while alive.

Of the six NPC spellcasters, two-thirds use Wisdom as their spellcasting ability.

In the Monster Manual, 376 attacks or powers require a saving throw by the target. 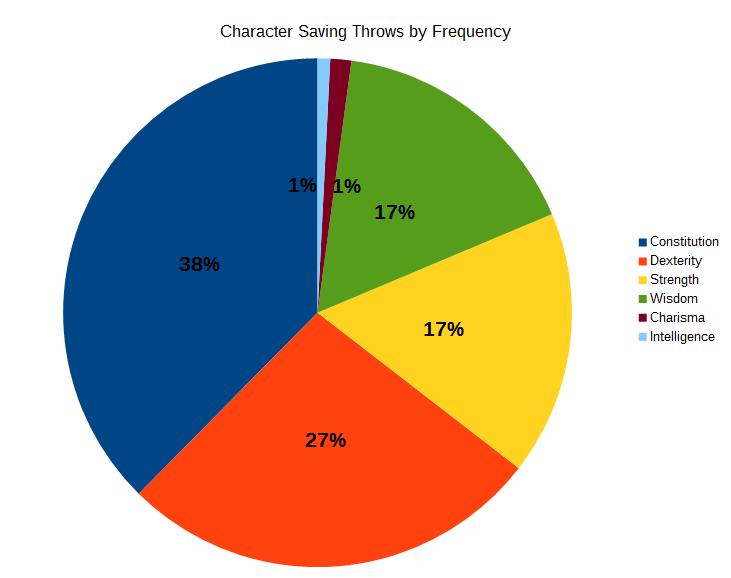 Only seven (flying sword, azer, mummy, otyugh, all three zombies) have a single bonus. All the others get bonuses on two or more saving throws. The numbers of times each ability benefits are listed below. Percentages reflect how often that ability appears out of the six ability scores, not how many monsters out of the entire population receive that bonus. 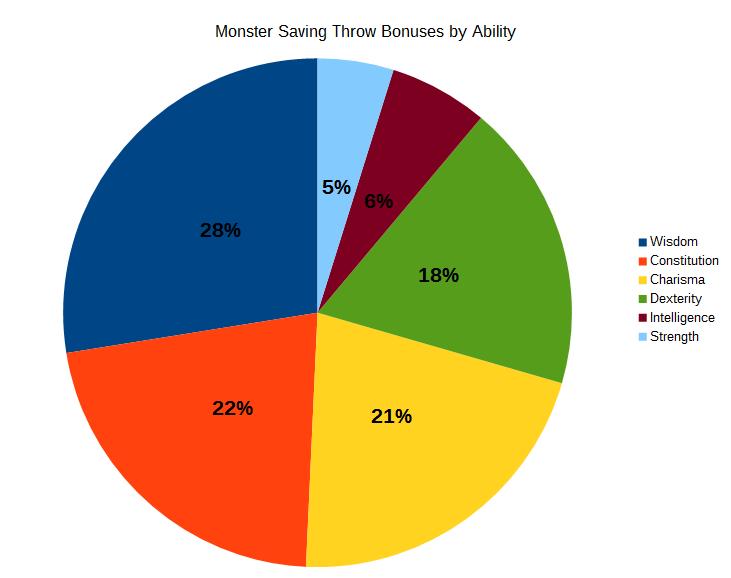 Out of the Monster Manual stats, 57 creatures have Magic Resistance.

In the Monster Manual, 258 stat blocks include a Skills line.

A full 60 percent of creatures have proficiency in at least one skill. Out of all the creatures that get skill bonuses, only 51 (20 percent) don’t include a bonus to Perception.

That’s counting ten dragon breeds just once apiece, not once per age category.

Most creatures can see in the dark.

Note that there’s overlap in these categories; that is, some monsters with darkvision also have tremorsense, and so forth. That’s why the percentages don’t add up to 100. I’m sure someone will find this odd bit of data useful—although right at this moment, I don’t see how. 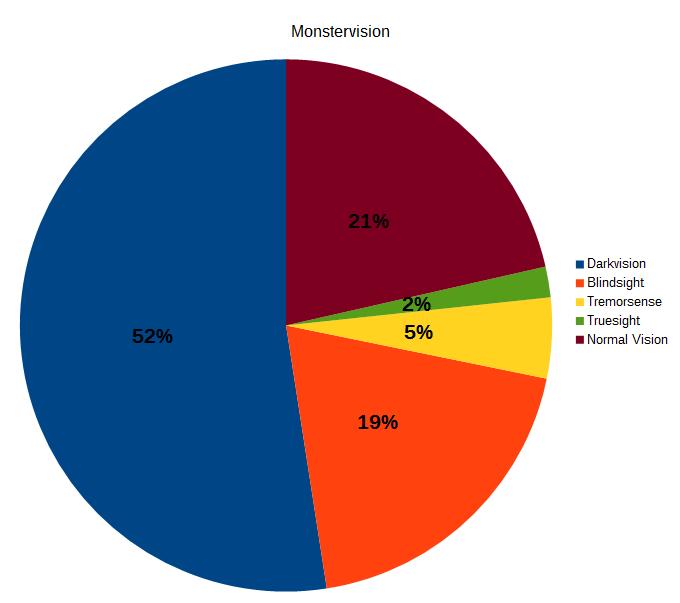