Skip to content
Home / Delve into the Depths in the Kobold Blog / Howling Tower: Imagine a World… 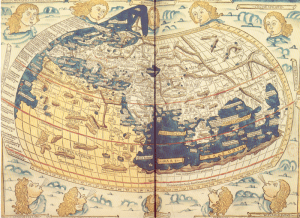 Like the Scarecrow, I believe that one of the greatest rewards for having a human brain is the ability to think deep thoughts. To imagine the big picture. To envision a grand machine in your mind and then command its wheels to turn and its gears to mesh. It’s the joy of invention, of imagination, of pure creation.

Different people find that joy in different forms. For some, it comes surrounded by dancing numbers that align themselves in beautiful patterns. To others, it comes from a story that delivers the consummate twist at the ideal moment or resolves itself in the perfect way. To me, it comes in the form of an atlas that can zoom across continents, showing empires as they rise and fall. It shows cultures in migration, the growth of cities, and the spread of order or chaos, right down to the cruel warlords, eccentric shop owners, or talking animals that define whatever macrocosm or microcosm sits under the lens.

We tell ourselves stories all the time. World building is storytelling, with or without an audience. That’s part of what sets it apart from other GM duties. Adventures and encounters are meant to be played. They aren’t written as much as they are designed. Setting material–harbor details, NPC names and personalities, caves in the far corners of the forest, the names of the constellations or of the King’s children–may never appear in play. GMs fill notebooks and computer files with such minutiae simply because it is fun to create. Besides being storytelling, world building is its own form of play.

There was a time when every RPG encouraged GMs to create their own campaign worlds. They enticed new GMs with promises about the unique rewards of world building. Anyone could enjoy it regardless of whether they were pumping their ideas directly into a weekly game or keeping it to themselves as a solo pursuit. And it’s all true.

“World building” as a hobby is considerably older than roleplaying games. Imaginary worlds are a storytelling staple. The Hyborian Age, Barsoom, Nehwon, Narnia, Middle-earth, Lilliput, Oz, and the Hundred Acre Wood were fully fleshed-out fictional realms complete with maps, cultures, and histories well before anyone assigned Strength and Intelligence numbers to a character. Some of the best-known packaged RPG settings predate D&D. Tekumel (Empires of the Petal Throne), Glorantha (Runequest), Faerûn (Forgotten Realms), and Jorune (Skyrealms of Jorune) all started out as exercises in imagination. Roleplaying rules came later.

GMs shouldn’t keep all this fun to themselves. An ongoing campaign is not just one person’s vision. Players are entitled to contribute, too. If the GM doesn’t extend an invitation, then players should raise their hands and volunteer. Each player (or at least those who are interested) can become the expert on one region or one facet of the world.

An online wiki is the perfect repository for this information, divided into public and private (GM only) areas. Wiki software is easy to find all over the web, including a few sites intended specifically for use by roleplayers.

Creating the world’s map and history can even be a group undertaking, before the first adventurers set foot on the road. Dawn of Worlds (Legends) offers one way to tackle that task as a sort of game before the game, or you can work out your own procedure. Players who help to establish the world this way enter their first adventure already armed with the basic knowledge their characters would have about their home’s history, geography, and culture without pausing for exposition breaks during play.