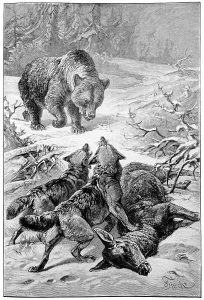 Your adventuring party runs across a creature in a random encounter. How does the creature act? Is it aggressive? Protecting its young? Is it hungry? Most encounters simply assume the creature is a minor speed bump in the party’s day. An easy way to give the encounter a bit more depth quickly is to determine the creature’s mindset. Some mindsets can grant small mechanical advantages, but most simply designate a simple goal for a creature and when it would flee.

Peckish (Hunger): This level of hunger is low—the creature isn’t interested in an immediate meal. A creature with this mindset will fight until it is at 75 percent of its total hit points.

Moderate (Hunger): A creature with moderate hunger is actively searching for food and will go to some lengths to obtain it. A monster with this mindset fights to 50 percent of its total hit points.

Ravenous (Hunger): At this level of hunger, the creature has considerable hunger. The creature is starting to weaken and is willing to go to great risk to obtain food. A monster with this mindset fights to 25 percent of its total hit points.

Starving (Hunger): Starving creatures are weakened from lack of food. A creature with this mindset takes 2 temporary ability damage to its Strength and Constitution scores, and it will fight to 10 percent of its total hit points. If a creature has this mindset, it is always the primary mindset of the creature and may be changed to another mindset only after it has eaten.

Aggressive: An aggressive creature immediately attacks to drive off other creatures. Male creatures during mating season often take the aggressive mindset, as do tribes of creatures that wish to drive off anything the group sees as competition. A creature with this mindset will fight to the death or until its opponent flees.

Calm: A calm creature is docile and offers no threatening behavior. This creature becomes curious if a possible threat is sensed.

Curious: A creature with the curious mindset is simply investigating something new or unusual in its surroundings. A single hit that does damage or another action that would cause hesitation in this creature (a waved torch or thrown rock) causes it to flee.

Defensive: A creature that has a defensive mindset has a reason to stand its ground. Whether it’s protecting a recent kill or it’s defending its lair, it does not wish to be removed from its current area. A defensive creature will fight to 10 percent of its total hit points before fleeing.

Enraged: A creature with the enraged mindset has triggered a blood thirst. The creature benefits from a rage spell effect and cannot end the spell’s effect before all opponents have been defeated or have fled. An enraged creature fights to the death.

Greedy: A greedy creature has the goal of either robbing its targets of their belongings or of fixating on a particular shiny item and attacking until it obtains its goal. Creatures with the greedy mindset attack until they have 50 percent of their total hit points remaining.

Murderous: A creature with the murderous mindset is intent only on killing. Like a cat hunting a mouse, this creature has no other objective than killing its prey. A murderous creature will fight until its intended target has been killed.

Panicked: A panicked creature flees from all opponents as quickly as possible.

Protective: A creature with the protective mindset will give its life to protect something, whether it’s the creature’s young, a companion, or something else that seems appropriate for the kind of creature it is. A protective creature gains a +2 morale bonus to its Armor Class, and it fights to the death.

Creatures with an Intelligence score greater than 3 can have a layered version of the basic mindsets. A bandit may be greedy for food or for money to buy food, with a secondary defensive mindset for the adventurers threatening his turf (and whatever goods he has already stolen but not fenced). Underlying these two mindsets is the fact that the bandit might also be ravenous due to the drought that has plagued the city and made food very scarce and expensive.

During the course of an encounter, if the bandit’s primary goal (greedy) has been met, it then falls to the secondary mindset to determine his behavior (defensive). If the bandit falls to below 10 percent of his hit points, that bandit will then fall to the third mindset (ravenous), which has a hit point threshold that has already been exceeded. At that point, the bandit flees. If the adventurers encounter the bandit in a different location and found this outlaw to be only greedy and ravenous, then the bandit would fight until he had stolen what he wanted. He would flee right after accomplishing this goal.

During an encounter, a mindset for a creature can change. A bear encountered during mating season starts out aggressive, but a critical hit wounding it makes it enraged. When and how a creature changes its mindset are at the discretion of the GM.