Skip to content
Home / Delve into the Depths in the Kobold Blog / Howling Tower: Expect Things to Go Wrong 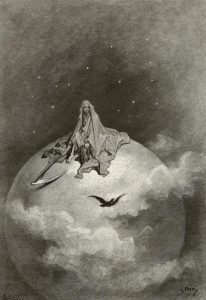 (This is the fifth installment in a series of articles for players hoping to get the best possible experience from their time around the RPG table.)

“Adventures, in retrospect, are pieces of extremely bad luck that missed a fatal ending.”

It’s a shame that Lawrence Griswold isn’t better known these days. He was a real-life Indiana Jones, a Harvard-educated anthropologist and archaeologist who spent most of the 1920s and ‘30s carving trails through Guatemalan jungles in search of Mayan ruins and exploring the then-”lost world” island of Komodo, south of Borneo, where his expedition was the first to capture a live, adult Komodo dragon. A memoir of his adventures, Tombs, Travel and Trouble, was published in 1937, wherein he offered the humorously cynical view of adventure quoted above.

However much Griswold objects that “while (adventures) were happening to me, I cannot ever remember having been particularly pleased at the occasion,” or that he was generally “scared to death, too busy to think about it at all, or just damned annoyed” while his adventures were taking place, it’s obvious that in hindsight he loved every moment of it and wouldn’t trade his experiences for anything.

It would be foolish to expect adventures in roleplaying games to go any smoother than they do in real life. In fact, since our tabletop escapades never result in anyone really getting killed, injured, maimed, scarred, trapped in a labyrinthine tomb, or cast adrift in a rudderless boat for five days without water, they can afford to be even more thrill-filled than the real thing, the way a roller-coaster ride is more thrilling than a drive on the freeway.

Reversals of fortune, failed plans, villains who are a step ahead of the heroes, narrow escapes, and surprising plot twists are the meat and potatoes of melodrama. Roleplaying adventures can be elevated to a higher dramatic plane with effort, but the fact is that melodrama plays very well around the RPG table. Given a choice between subtle psychological conflict and broad physical escapades, most players opt for the escapades. The RPG medium practically demands that every adventure be a string of catastrophes the characters barely survive—or don’t, depending on choices and luck.

The Most Important Tactic: Running Away

The villains of the story always have an escape plan; the heroes should, too. Unless your goal is to steer your character to an ultimate, glorious, heroic Götterdämmerung, there’s no shame in running away from certain defeat.

The characters’ goal in the adventure is ultimate victory. But things are guaranteed to go wrong, remember? It would be foolish to expect nothing but victory after victory after victory along the road to ultimate victory. Maybe more importantly, it would be dull. Even sports fans, who like nothing better than an undefeated season for their favorite team, get bored if those wins come too easily.

Always step into danger knowing where the exit is. Have the flexibility and the savvy to know when an assault needs to become a reconnaissance in force and an advance needs to become a retreat. When the enemy is too powerful, it’s time to fall back, lick your wounds, regroup, and plan a fresh attack with a better chance to succeed because it takes into account everything you just learned. That’s not failure or cowardice; it’s war.

“Adventure, yeah. I guess that’s what you call it when everybody comes back alive.”

No matter how much players plan and how well they play, sometimes characters die. Losing a character who’s been part of the group for a long time can be emotionally wrenching. It does not, however, mean you’re stupid.

It doesn’t mean you’re smart, either.

What it probably means is that you were either a) reckless or b) unlucky. All too often, doom comes about through an unfortunate confluence of both.

If the character was powerful enough to be a real loss, there’s at least some chance that he or she can be brought back to imaginary life through magic, miracles, or mega-science, depending on the game being played. Wise players set aside a “resurrection fund” to pay the usually steep fees involved, as a form of life insurance. Everyone kicks in a regular share of loot so that when the sad inevitability comes about, the communal kitty holds enough cash to foot the revivalist’s bill.

If resuscitation isn’t an option, it leaves no choice but to accept fate, learn whatever lesson can be learned, and move on to the next character. Under no circumstance should players who’ve lost characters feel as if the loss proves they’re stupid or they’re losers—and anyone else around the table who makes them feel that way deserves a stern lecture from the gamemaster or other players. Even if it’s all in your imagination, your fellow players are comrades in shared virtual adversity. Recognize that a character’s death is tough and extend the player some respect and compassion.