Skip to content
Home / Delve into the Depths in the Kobold Blog / Howling Tower: Dive Into the Unknown 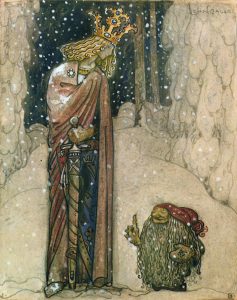 This is the fourth installment in a series of articles for players hoping to get the best possible experience from their time around the RPG table.

“… Isn’t it splendid to think of all the things there are to find out about? It just makes me feel glad to be alive―it’s such an interesting world. It wouldn’t be half so interesting if we knew all about everything, would it?”
― L.M. Montgomery, Anne of Green Gables

In what I consider to be the very best types of roleplaying adventures and campaigns, both characters and players face situations where they don’t understand what’s happening and they’re being pushed to make decisions without crucial information. Sometimes they’re faced with a mystery, and filling in the missing information is the point of the adventure. Your opinion on that type of play might be different from mine; certainly there are players who like to feel as if they’re in control of the situation all the time. I don’t begrudge them their preference, but I do believe that they’re missing out on a huge quotient of enjoyment.

Most RPG settings are worlds of wonder. Whether you’re playing a fantasy game with magic and mythical beasts, a science fiction game with starships and aliens, a steampunk game with super-science and dinosaurs, or a post-modern game with vampires and murderous cults, the setting is rife with amazing things that don’t exist in real life. Experiencing the “wonders of the world” and uncovering its hidden truths can be a major thrust of the campaign, or it might be a sidelight. Either way, if players understand everything there is to know about the setting and the story they’re involved in, then I’d argue that the GM has made the world too small and too familiar.

A game that evokes a sense of discovery and lets me fill a blank space on the map draws me in like no other. It’s what made me a lifetime fan of boardgames such as Source of the Nile, and of exploratory computer games like Tomb Raider. When I think of D&D, the first image that comes to mind isn’t a hulking monster battling heroes and wizards; it’s a dungeon corridor, a cave, or a murky forest trail disappearing into darkness or around a bend, begging to be explored.

Although the roots and role of curiosity in human psychology are unclear, we all go through a stage where we’re driven to find out what’s hidden in the back of the closet, or to shine a flashlight into the dark corners of the basement, or to drive a few miles out of our way because we’ve always wondered what’s down that side road. Tabletop RPGs are perfect for scratching that exploratory itch. Unless you’re that rare unlucky person with no curiosity, embrace the unknown and go exploring.

Get Creative with Utility Magic

“It doesn’t stop being magic just because you know how it works.”
― Terry Pratchett, The Wee Free Men

Fireballs and lightning bolts are great for mowing down enemies, but they’re not much more than grenades and machine guns with different skins and sound effects. Mighty wizards of legend and mythology seldom blew anyone up or speared them with lightning; that sort of mayhem was more often the handiwork of a god. Wizards specialized in the types of magic that gamers call “utility spells”—becoming invisible, changing their appearance, speaking with or turning into animals, peering into a distant location, clouding people’s mind with illusions or winning their friendship with charms.

Those types of spells feel more magical than spells that spew out fistfuls of damage dice. That’s because utility spells tinker with the laws of nature in interesting and profound ways. Magic should be about bending reality to the wizard’s whims.

More importantly, utility spells allow for much more creativity from players. It’s possible to get creative with a fireball or a magic missile, but not very. Attack spells tend to do one narrow thing and nothing else. Beyond that, getting creative with them depends more on what the GM will let you get away with than on how clever you can be. Contrast that with the myriad things a character can do with flight, darkness, illusions, or a simple invisible hand. Such spells might not slay many foes—although even that’s not out of the question—but they can circumvent battles entirely and solve problems that brute force is powerless against, once you develop the habit of thinking beyond the basic spell description.

“It is a delightful challenge to try to depict interesting aliens.”

“Aliens” can mean both “people from a foreign land” and “creatures from another world.” For my purposes, I’m focusing on the second definition, because players too often fall back on the first.

It’s easy to think of elves and dwarves, or aslan and vargr, or mice and crows, as folk basically like us but from a different country or from a particular historical period. Dwarves, for example, are easily molded as Germans or Vikings, while elves fall into place as Byzantine Romans or Incas.

Even these handles are better than some alternatives, such as treating dwarves only as grumpy humans or, worst of all, as nothing but a way to get bonus damage with an ax and resistance to poison. Such lame approaches squander a great roleplaying opportunity by overlooking the fundamental fact about nonhuman characters: they aren’t human.

Science fiction movies, novels, and TV shows in particular are often criticized—rightly so—for presenting aliens as nothing more than humans with unusual skin and odd fashion sense. But creatures that live for thousands of years, or that spend their lives mainly underground, or that are smaller and weaker than all their neighbors, are bound to have significant cultural differences from humans. Those pathways beg to be explored just as much as any dark dungeon corridor or mysterious valley.

All three of these approaches to roleplaying—embracing and exploring the unknown, finding creative uses for utility magic, and treating nonhumans as aliens—call for cooperation between players and gamemasters. The GM probably has definite ideas about the races and cultures in the game world, and it’s disrespectful to head in a different direction without warning. Likewise, heading literally in a different direction from what the gamemaster has mapped or at least considered can throw some GMs into a tailspin. Discussing your ideas with the gamemaster outside the game, rather than blindsiding him or her in the middle of a session, is always advised.

3 thoughts on “Howling Tower: Dive Into the Unknown”