Skip to content
Home / Delve into the Depths in the Kobold Blog / Howling Tower: Cardtography and the Wilderness

The cardtography method can be used to lay out a wilderness area just as easily as a dungeon. All that’s needed is an encounter grid tailored to your particular wilderness. Creating the grid isn’t much more difficult than building a table of random encounters since that’s essentially what it is.

A wilderness area is a good place to use the option for determining the lengths of connections between areas, as described in part 2 of this series. Whenever a connection between cards is established, reroll the die; the result is the distance between the cards. Since we’re talking about a sprawling wilderness instead of a compact dungeon, the distances involved need to be long. Each pip could represent half a mile, one mile, or an hour of travel. If you’re building an area that really sprawls—an island archipelago, for example, or a region of space with inhabited star systems—then each pip of distance might represent days or weeks of travel. Use a measure that fits the situation.

For this example, we’ll build a generic stretch of wooded hills for a group of fantasy adventurers to explore.

A question that needs to be answered right away is, why are connections needed at all? Can’t people walk wherever they like in the wilderness, unconstrained by dungeon walls and corridors?

In wooded hills, characters probably can walk wherever they want, but some directions are naturally more difficult to travel than others. Stretches of forest might be densely tangled or split by deep ravines or blocked by stony bluffs or a river might be flooded by recent rain or melting snow. In our wooded hills, rolled connections indicate easy paths (this may be different in other types of terrain). Characters can opt to travel along a different path, but if they do, they either encounter a hazard of some sort or the trip takes three times longer than usual (roll 3d6 for the connection “length”).

As usual, black numbered cards are areas with no features of interest. They make good camping spots.

It’s worth pointing out that this grid generates lots of encounters and events—many more than typical random encounter tables, which usually allow only a 1-in-6 or 3-in-20 chance for an encounter. This grid gives a 63 percent chance for a location to hold something potentially dangerous or intriguing. The difference is that most random encounter tables are based on time, whereas this system functionally divides the terrain into zones of abstract size and makes one “check” per zone.

Still, if 63 percent is too high a chance for your taste, you can scale it back by deleting all the encounters on numbered diamonds (for example) or alter the table so hearts produce dangerous encounters and diamonds produce only potentially helpful encounters, as in the alternative, second grid below. 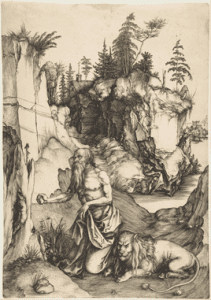 Cairn. An enormous mound of rocks has been piled atop a hill. Hundreds of rusted weapons and helmets are embedded in the heap, along with animal skulls, pelts, shells, and feathers. Similar cairns were built ages ago as tombs for primitive chieftains. This one appears to still be revered by local savages of some type. It may still contain treasure (and undead), but the tribe that leaves offerings on the cairn won’t be happy if it’s desecrated.

Cemetery. The presence of many gravestones and obelisks marks this spot as a cemetery. A diligent search of the area eventually turns up the foundations of many burned-out huts and a larger structure that may have been a church or village hall. The village was destroyed decades ago by marauders, but their superstitions prevented them from looting the cemetery. Ironically, the cemetery is the only place that’s now safe from the wraiths of the slaughtered villagers that prowl the ruins after dark.

Cenote. A stone-lined sinkhole drops 30 feet to a pool of bitter-tasting but safe water. A careful search of the pool’s rocky bottom turns up a skeleton with two broken legs and a magical dagger in a rotted sheath.

Dusty Tower. A three-story tower stands in the low ground between several hills. The tower appears abandoned, with its door and all its shutters torn off their hinges and scattered across the ground around the structure. The inside is abnormally dirty; sand and fine dust cover everything to a depth of half an inch and are drifted several inches deep along walls and in corners. Tracks indicate that animals and humanoids have entered the tower, but they all disappear within 6 feet of the doorway. The tower is the abode of a nest of dust mephits.

Frog Farm. A dilapidated farm surrounded by marshy ground stands abandoned by everything except thousands upon thousands of frogs, including normal frogs, poisonous frogs, carnivorous frogs, and possibly even giant frogs, a froghemoth, and a few bullywugs.

Hermit’s Shelter. The hermit who lives in this poor hut is friendly, wise, and willing to share his simple fare and advice with travelers. He also has a powerful magical relic in clear view in the hut, which he won’t part with under any circumstance. if he’s murdered and the item is taken, the hermit returns as a powerful undead to exact vengeance on the thieves. If the item is stolen, the hermit dies a week later anyway from starvation and sorrow, with the same effect as if he’d been murdered.

Plague Village. A village of ten to fifteen families (around 100 people) has been wiped out by plague. Everyone who remains is infected; it’s your choice whether they hunger for human flesh.

Prehistoric Garden. A “forest” of prehistoric ferns, flowers, and primitive trees fills a secluded glen. Most of the plants are harmless, but enough of them are poisonous, predatory, or carnivorous to make the glen a hazardous place to linger or transit.

Reeking Hatch. The otherwise green landscape is scarred by a patch of dead plants a hundred yards in diameter. At the center of this blight is an enormous wooden trapdoor: immensely old,sagging, and sprouting unidentifiable fungi around its rusted iron fittings. The worst thing about it is the abominable stench wafting up from below the trapdoor. If characters pry it open—a task requiring levers applied by several strong backs, or two horses—it’s a perfect opportunity to create a new cardtography matrix to represent this subterranean nightmare.

Smoking Pit. A column of smoke can be seen from a mile or more away. The smoke wafts up from a sinkhole that opened beneath a cabin, as evidenced by the ruins that still cling desperately to the lip of the hole. It could be nothing more than a mine that caught fire, or it could be a chimney vent from a duergar forge.

Web-hung Ruins. The forest has completely grown over these ancient stone ruins, making it almost impossible to spot them from a distance or to gauge their extent by sight. The mix of trees and crumbling stone walls makes the perfect spot for giant spiders to weave their web traps.

Weeping Stones. A field of towering boulders jumbled atop one another stretches across the path. Progress is slow, as characters must either scramble laboriously over the boulders or pick their way along the few narrow paths that wind between them. Either way, it’s impossible not to hear the sound of someone crying softly—or maybe it’s several people. Characters can get closer to the sound, but it always shifts to another direction before they reach it, inexorably drawing them closer to the center of the boulder field and its hateful appetite.