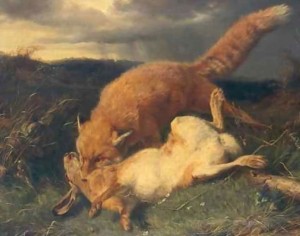 The druid class within Wizard of the Coast’s Heroes of the Forgotten Kingdoms details sentinel druids of spring and summer. If you want to expand your seasonal versatility, take a look at the sentinel druid of autumn.

As a sentinel druid of autumn, you draw your strength from the time of high harvest, when life that has flourished is reaped to sustain the rest of the natural cycle. By words and actions, you remind your allies that they are strengthened by anything that does not destroy them.

Your chosen weapons are the tools of the harvest: the scythe, the flail, and the heavy flail. Like a winnower who separates the grain from the chaff, you use these tools to reap from your foes and separate them from your allies.

HP your bloodied value; Initiative equal to yours

(Add your level to each defense)

Fox’s Cunning • Aura 1
Allies gain a +1 power bonus to saving throws while in the aura.

Effect: Before or after the attack, your animal companion can shift 1 square.

Level 13: Paragon of the Natural Cycle

Druid of Autumn: Just as your chosen weapons lay low the crops in the field, your attacks cause your opponents to fall like grain.

Benefit: When you hit an enemy with a weapon attack power using a scythe or a weapon from the flail group, the target falls prone and cannot stand up until the end of your next turn.

Quick and elusive, a fox is rarely where you thought it was, and it always turns up to strike where you least expect it.

Target: Your fox animal companion in the burst

Effect: The target shifts a number of squares up to its speed. It can use its bite up to 2 times at any point during the shift, targeting a different creature each time, and it gains a +4 power bonus to damage rolls made while using this power.

Autumn: When you use your second wind, choose one ally within 10 squares of you. That ally can spend a healing surge as a free action.

Jeff Dougan is a science educator and father to the Grasshopper, 6, and the Munchkin, 19 months. A lifelong gamer, he writes about playing games with kids for Chambanamoms.com and is the author of the Dark Pact Hexblade material previously published by Kobold Quarterly and the the Snow Queen during the Winter is Coming blog carnival.

8 thoughts on “Sentinel Druid of Autumn”