Skip to content
Home / Delve into the Depths in the Kobold Blog / Heritage of Heroes: Orcs 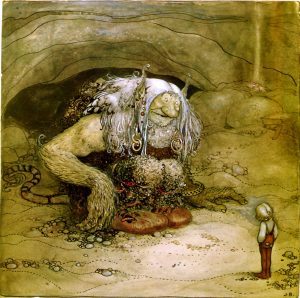 For all the races in all the worlds… what about the subraces? Heritage of Heroes brings you variant racial features for Midgard to help your hero stand out from the pack.

The following variant traits allow you to play a full-blooded orc, using the half-orc as a chassis. You lose the Savage Attacks feature. Your other “half-orc” traits remain the same.

Orcs are reviled across Midgard and rarely included among the ranks of the heroic, “civilized” races of the world. The enmity between the humans of Midgard and the orcs has stood since time immemorial, and none can remember who threw the first stone or hurled the first spear. The orcs once called the rolling Rothenian Plains and craggy Cloudwall Mountains their home before humans and elves allied to slaughter them like animals.

The blood of orcs, humans, and elves watered the plains for centuries until the orcs, broken and beaten, withdrew. They now hide in underground enclaves and mountain tunnels, planning revenge against their mortal enemies. Orcish civilization is predicated on the teachings of the White Goddess (see Midgard Campaign Setting), a warlike sun goddess who takes the form of a hulking, albino orc. Tales of her ferocity and power have united the orcs with other war-worshiping races like goblins, derro, ogres, and certain tribes of kobolds and centaurs.

Those few orcs who consort with humans and other “civilized” races tend to gather in the Free City of Zobeck and are descended from the Skyspear tribe of the Cloudwall Mountains. Many of the orcs who have joined with humans have done so only out of necessity, usually for money as a mercenary or for a guarantee of protection against future orc hunts. A few unusually idealistic orcs believe that they can improve humanity’s opinion of their race from within. It is yet to be seen if this optimistic dream can be realized.

Age. Orcs mature much faster than humans, reaching maturity by age 10. All orcs die by their fiftieth year, though most perish in battle long before then.

Alignment. It is an undeniable fact that most orcs commit great atrocities when bent to the will of evil masters. Yet, despite their evil reputation, few orcs willingly seek out the dark powers of this world—only those as power-hungry and despotic as humans who would do the same. Orcs in Zobeck can be of any alignment, and those in the wider world tend towards chaos.

Size. Orcs are mountains of muscle and fury, easily towering over even the tallest of humans. They range from 7 to just under 10 feet tall.

Aggressive. As a bonus action, you can move up to your movement speed toward a hostile creature you can see.

Charm Susceptibility. Your people have a history of subjugation at the hands of charismatic warlords, dark sorcerers, and conquering demigods. You have disadvantage on Wisdom saving throws made to resist being charmed.