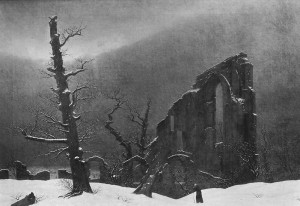 “When a tree falls in the forest, who is there to witness its fall?” asked Thorvall the ranger through gritted teeth. A jolt of pain in his leg momentarily halted his philosophical musings. “Who else but thrice cursed me!”

Thorvall assessed the situation: it was bad, extremely bad. His ruined left leg was stuck under the dead weight of a rotted oak. He was lying on his belly in a bed of autumn leaves, and his prized axe was just out of reach. The axe would have made the job of freeing himself a whole lot easier, but at least he still had his dagger. That would get the job done.

Suddenly, he heard a rustling of leaves, the sound of something flying through the air, and pain. Horrible pain as something landed heavily on the fallen oak. The extra weight pressing on his ruined leg was excruciating.

With an effort, Thorvall looked over his shoulder and saw a worg looming over him, and his fingers tightened around the dagger’s hilt. Thorvall was not at all surprised when two more worgs strode into view. “Thrice cursed” Thorvall spat “thrice cursed…”

The moss-covered remains of a fallen oak is the center of the dead man’s tree haunt. Nearby a cold iron axehead can be discovered (Perception DC 15).

CE haunt (15-ft. diameter area); persistent
Caster Level
6th
Notice
Perception DC 25 (to hear growling followed by the sound of flesh being ripped into)
hp
27; Trigger proximity; Reset 1 day
Effect When this haunt is triggered, the wraithlike head of a wolf appears and attacks a random target in the affected area. Treat the head as a spiritual weapon spell (Atk +7, 1d8+2 damage).
Destruction Burning the fallen oak destroys the haunt.

• An old trapper boasts he has touched the trunk of the dead man’s tree, and he dares a PC to do the same.

• The duke has organized a hunt, and the PCs are invited. They are on the trail of a majestic white stag; the stag cunningly leads them to the haunt.