Skip to content
Home / Delve into the Depths in the Kobold Blog / My First Gen Con: Jess Hartley 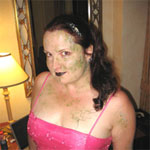 The tunnels are complete! The kobolds are now loose inside the Gen Con Exhibit Hall, feverishly building their booth. Hopefully their journey to Indianapolis was easier than the one Jess Hartley describes in her contribution to our “My First Gen Con” guest blog series.

Getting to my first GenCon was an adventure. Terrorist threat messing with flights? Lost luggage? Replacing clothing at midnight? Losing rental car keys at 1am? I got it all.

But the convention made up for it. Meeting industry folks who I’d worked with (or whose games I’d played) for the first time was a real treat… Shopping the Exhibit Hall, playing new games, my first industry panel, signing books at the White Wolf booth—just awesome.What will stay with me forever, though, is the sheer number of other gamers there. I was living, at least for a weekend, in a town full of people who “get” you. The sense of community, of camaraderie? That’s unforgettable.

Jess Hartley is a novelist, editor, game designer and developer, fiction writer, and all around wordsmith. She has written content for more than 30 roleplaying game products for White Wolf. Recently she helped create Geist: The Sineaters, as well as multiple electronic projects which support  Changeling: The Lost. After the success of her four-part series, Gen Con for the Aspiring Professional, Jess began a weekly advice and etiquette column entitled One Geek to Another.