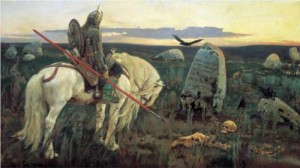 In a world where demons really could leap out to get you at any time, it’s hard to be too crazy, but that’s how most people view this society, which is of the firm belief that all historical events (and ruins, and other sites of interest) are based entirely on the location and actions of the world’s ley-lines, and that future events can be predicted if they can properly understand the pattern. Most people believe that this is entirely bogus, but the problem is that, frequently, the society is correct about how ley-lines and events have intersected. Or perhaps it really is coincidence; after all, when you get enough wizards over a well of power, something interesting is going to happen sooner or later. Unfortunately for everyone else, the society has recently begun to predict a major event involving the ley-lines, with the potential to cause a catastrophe wherever it occurs. Members have recently been sent out into the world to measure changes and look for signs that can hopefully be used to minimize the extent of the damage, but it’s hard to say whether or not they’ll succeed.

Wizards are never the type to leave a good source of power untapped, which probably explains why the Linewalkers are so welcomed by many other wizarding communities. Dedicated to exploration, the Linewalkers follow the Ley Lines of the world, charting their path and their power to determine the greatest concentrations of energy. Atop these focal points is where many wizarding schools (or at least local buildings) are constructed, since the surplus of magical energy is actually quite comforting. The Linewalkers are also experts at troubleshooting and resolving problems with ley lines; focal points are one things, but energy buildups are quite another and could have disastrous results for everyone involved…

Ley-lines are focused streams of power that run deep under the ground, so it’s no surprise that magic involving them is occasionally . . . big. The Earthmovers are generally an unpopular group because of the simple fact that their actions can have significant impacts on the placement of many other arcane locations. Ultimately, the goal of the Earthmovers is to use their powers to adjust the flow of all ley-lines and get them to flow into one region: their home. They’ve already succeeded a number of times, and the excessive amount of energy flowing beneath their base has only made it harder to attack, particularly because so few others can use ley-lines at all. Alliances with earth-based entities (including Outsiders) hasn’t hurt, either, and the base is tough enough that only a powerful group could possibly breach it and work to start moving things back to normal. Of course, the Earthmovers aren’t the type to let that happen, and great rewards are offered to groups that help protect them while they cast their ley-line shifting spells.