Skip to content
Home / Delve into the Depths in the Kobold Blog / Grimm Games: Godfather Death 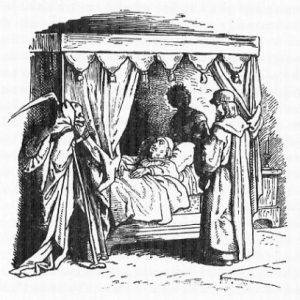 A personification of death is a common fantasy element that is rarely seen within a game, possibly because players tend to try to attack everything that moves, and the idea of defeating death itself blinds them to their doom. The black-robed specter of our own demise has been involved in the game since the beginning, with grim reapers given stats, the deck of many things pitting players against them, and a few of them as main encounters in a dungeon. However, much like the gods, Death shouldn’t be someone that can be defeated or cheated, as Godfather Death clearly shows. Grim reapers may be its powerful minions, but Death is eternal, immortal, and invincible. Death will be the last one remaining as the stars blink out, the last living thing breathes their last breath, and the gods fade away to oblivion.

Godfather Death isn’t a tale about a fight with Death, but one that shows how he can be an ally and power check for the party. It is about hubris, pride, and how believing in fairy tales can be dangerous. The thirteenth son in this tale has no doubt heard the bedtime stories of common heroes getting rich by tricking the devil, or how they used their wits to win the hand of the princess. He may even believe that he is one of those heroes, and as a result he tries to be clever and cheat Death. Death had been the perfect godfather to him, giving him a profession and the best tools to become the best physician in the world. But the young man did not heed his godfather’s warnings and took a one-time act of mercy for granted.

Players, and by extension the characters they play, are much like the young man. They have heard the stories, they know they are the heroes of their own legends, and they often believe that they can cheat Death within the game. Death makes them rich, as it has no need for the loot left on corpses. Sometimes it does show mercy when the player characters have ignored the warning and pushed into dangerous territory. Spells such as raise dead and resurrection allow players to take dying for granted—even laugh at it as their characters are brought back from Death’s grasp for the fifth or sixth time.

What we may not realize is that raising the dead may not be the best thing for some games. Sometimes having a character remain dead gives a great end to that character’s tale and allows a new story to start. There is no need for all of our stories to end with, “and they lived happily ever after.” Sometimes going out in a blaze of glory is all the better.

It is important to keep in mind that characters are just ink on paper. Yes, we have invested time and energy into building them up to what they are, but starting fresh and new can open up even more possibilities for us. There will come a time when we will see Death standing at their feet and know it is time to let them go. It is okay to refuse a party’s offer to raise them from the dead and start up a new character—just make sure that the one force in control of death in the game, the gamemaster, is alright with introducing another character.

The same may be said about how the gamemaster handles death in a game. Some seek to kill as many player characters as possible, while others fear offending a player to the point where they use means outside of the traditional rules to bring a PC back to life. There must be a balance, and going in either direction can create harm to a game. Death’s candles required one to be snuffed out to keep one lit, and in our games we can end up snuffing out great possibilities, or even the fun from the game, when we don’t consider carefully how to proceed. Frequently killing player characters can create frustration and anger if the players feel it is unfair. Refusing to let a player character die means the player can’t explore new character options.

Finding that happy balance takes experience and knowledge of your group, but putting in the time and effort to consider death carefully, whether a game mechanic or the personification of it, will always benefit you.