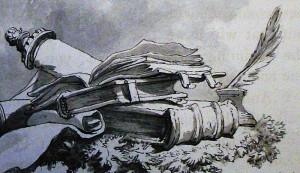 Ancient tomes speak of an age when magic was feral, where magic-users wielded nearly unimaginable and insurmountable power—provided they survived their first forays into spellcasting.

One such power was that of disjunction, or the separation of magic into its most base elements. While this ability was harmless on its own—and, in fact, valuable to early practitioners of alchemy—some wielded disjunction like a weapon, stripping the magic from their enemies’ possessions with abandon…

The remnants of this power can be found in the eldest catacombs beneath the realm, where piles of disjoined magic items lie broken and discarded. As centuries pass, the sundered arcane essences of these items leak and congeal, creating an invisible aura of anti-magic. This hazardous phenomenon is referred to by adventurers as disjunction decay.

A pile of decrepit items lies scattered across the floor, tarnished as if they had been dipped in several colors of dye.

Perception
No check is needed to notice the decayed items

Trigger When a creature carrying a magic item or artifact enters or starts its turn in the hazard’s area of effect, it attacks

Countermeasures
◊ With an Arcana check (DC 15 + 1/2 hazard level) and a standard action, you can grant an adjacent ally a saving throw against the hazard’s effect (this saving throw is made with a +2 bonus)
◊ Intelligent magic items automatically identify the hazard and grant their owner a +2 bonus to saving throws against its effect

When an artifact is destroyed by this hazard, the GM must secretly roll a d20, adding 5 to the result per artifact tier. If the result is 20 or greater, the event attracts the attention of a deity or other powerful beings who have an interest in or connection to the artifact.

The power to disjoin a magic item’s essence is, to the relief of many adventurers, rare and largely forgotten. Few dungeon lords of any kind are adept in its practice, and even fewer dare take advantage of the lingering effects of such destructive spells.

A disjunction decay hazard can be found amid remote dungeons in any ecology, populated by any manner of denizens.