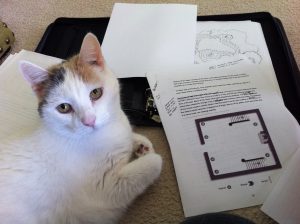 When I’m in one of my “mark up the draft” phases, I often lie on the floor so I can spread out and work. When I do this, my almost-as-smart-as-most-people cat, Cinnamon, lies next to me and watches me work. My wife, son, and I like to joke that Cinnamon is looking over my work and helping me write. While I was working on my Shadows of the Dusk Queen adventure, Cinnamon seemed particularly interested in helping me—so much so that I joked I was going to give her a co-writing credit!

I didn’t end up doing that (I suspect the byline “Written by Marc Radle and Cinnamon” would be a hard sell indeed), but I did slip a little homage to my ‘co-writer’ into the adventure itself. I’ll be curious to see if anyone can find it. :)

You can find Shadows of the Dusk Queen, a Pathfinder RPG adventure, at our Kobold Press store!