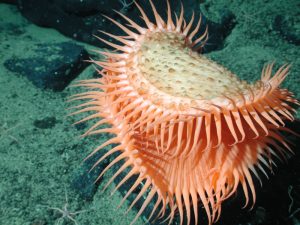 As the halfling stepped from the shadows, the ground covering snapped shut, engulfing him in a thick, green pod. The struggle ended in seconds, for the paralytic secretions acted quickly and his body proved unresponsive. However, he quickly learned that he could still feel everything.

The green trap is a large carnivorous plant that grows naturally in swampy climates, but through cultivation, these plants can grow in most temperate areas. They feed by fully engulfing their victims in a green pod that proceeds to secrete mucus, a paralyzing agent, and finally digestive enzymes. The plants were first used and cultivated by lizardfolk to catch small game. They would wait for an animal to be captured, then detach the pod and carry it back to the tribe. Tradesmen who witnessed these events began harvesting and cultivating the plants to be sold in many different areas. Due to their unique properties, these plants are sought by trappers, defenders, and slavers alike…

SPECIAL ABILITIES
Camouflage (Ex) When at rest, a green trap’s pod lays open and flat, resembling normal ground cover. A Perception check (DC 15) is needed to spot it before it springs shut. Anyone with ranks in Knowledge (nature) or Survival can use those skills instead of Perception.

Detach Pod (Ex) When full, the pod containing the prisoner can be detached. This is done by spinning the pod from the outside and severing it from the base with a blade or with brute force. Once a pod is detached, it no longer has connection with the digestive sac and will no longer attempt to digest the victim inside. However, as long as the victim remains in the pod, the paralyzing effects stay in place. Healthy pods take 4 days to decay while any pod that loses over 50% hp in combat decays in 2 days. Plants that retain their nutrient bladder begin regenerating pods in 1 day, taking 7 days to reach full size.

Engulf (Ex) As a standard action, a green trap can attempt to engulf a creature at least one size category smaller than itself (Reflex DC 15). Creatures engulfed are encased by thick, slimy plant walls that begin to secrete a paralyzing agent at the start of the green trap’s next turn. At the start of the third turn, the green trap begins secreting a digestive fluid, which deals 1d8+4 plus 1d6 acid damage. Anyone on the outside attempting to free the victim by attacking the pod has a 50% chance of hitting the prisoner.

Paralysis (Ex) Once engulfed by the green trap, it secretes a paralyzing fluid (Fort DC 15; Constitution-based). If failed, victims are paralyzed for 2d6 rounds. If a creature begins thrashing, the green trap secretes the fluid again.

Connected beneath the pod are several flat bladders. Each contains only one type of the following fluids: digestive juices, paralyzing fluids, or nutrients. If the digestive bladder is severed while the green trap has an engulfed victim, the plant opens up, essentially freeing the prisoner. However, they still suffer the effects of the paralyzing fluid. If the paralyzing bladder or nutrient bladder is severed, the pod does not release but, instead, secretes digestive juices one round earlier than normal. Knowledge (nature) (DC 20)  is needed to determine the correct bladder. Characters without the appropriate lore or knowledge have a 1d3 chance of severing the correct bladder. A green trap takes one day to regenerate a missing bladder. These bladders and their juices are sought after as components by both wizards and alchemists.

In the swamplands, the green trap can be found all over, waiting for animals to come for a drink. Cultivators of the plant place them under windows, along guarded walls or hedgerows, and in fields to catch unsuspecting farmers. Unattended, the green trap never wants for new victims. While it dissolves all organic matter, inorganic matter such as weapons remain behind. Many a novice adventurer has been lured into the green trap’s grasp by the site of a derelict suit of armor or seemingly misplaced magic ring.