Skip to content
Home / Delve into the Depths in the Kobold Blog / Gnasty Gnolls: Lore and Adventurers 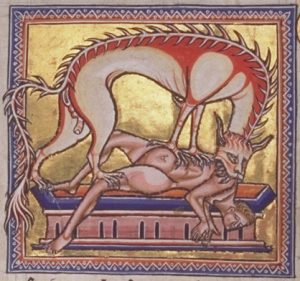 Gnolls are one of my all-time favorite monsters. From the blue box’s hyena-men, to the latest variations, these monsters have been hacking at parties for time immemorial. The following mini-ecology is system neutral, and it can inspire gamemasters and players to help cover the world with these beloved-yet-despised creatures.

Feral hunter-scavengers, gnolls are demon-twisted humanoid hybrids. With the head of a hyena set upon a tall though hunched humanoid body, gnolls are covered in thick fur that ranges in color from brown to yellow, and their fur is usually matted with the filth they bathe in. With dull black eyes, amber nails, and a curled bushy tail, some subtypes have black spots, and others, thick bristled manes. Male gnolls are a few feet taller than most humans, and females tend to be slightly larger still, though are otherwise similar in appearance. Gnolls wear a hodge-podge of chain and plates for armor—a virtual chart of past kills, with each bit holding fond memories of carnage. Gnolls feed on warm flesh and rotting carrion with equal satisfaction, and their hunting parties, bands, and tribes are encountered in both desert and tundra. Breeding prolifically, they have huge nurseries in their Underdark or fortified surface lairs, and, when food is plentiful, they collect slaves to serve various needs. Most gnolls embrace their demonic heritage, making the majority of gnoll societies tribal and violent. That said, some “civilized” gnolls live in urban areas, where they control their animal instincts and even tolerate other races.

Gnoll tribes unite around bloodlines and have a power structure grounded in size, intimidation, or success in gaining gold. In most gnoll tribes, the largest and most ferocious becomes leader, creating a societal tendency for matriarchies. Power shifts are initiated due to apparent weakness, such as an injury, and a struggle for authority can splinter a tribe into bands, with authority always seized by way of slaughter. Tribes are highly territorial and will vehemently defend hunting grounds. When a mutual threat is encountered, though, disparate gnoll tribes can cooperate.

Some gnolls are raised among other races and societal structures, and this can subdue their natural mandate, making them loyal and of service to others. All gnolls share a connection with hyenas, keeping them as pets, using them as hunting companions and mounts, and forming bonds that often exceed that shared with fellow kin or their own pups. Since gnolls tend to occupy the upper levels of the Underdark, they have also become accustomed to sharing space with bugbears, hobgoblins, ogres, orcs, and trolls. Loose alliances sometimes form between gnolls and such neighbors, though it does not take much (like a rumbling stomach) to shatter such relations. Otherwise, gnolls disdain giants and most other humanoids.

Adventurers are rare among gnolls, though not unheard of. Those gnolls that do leave the tribe tend to be more intelligent than their brethren, often questioning the shallow existence of the hunter-scavenger, and seeking to overcome their murderous nature. Though most gnolls have difficulty with arcane magic, some such adventuring types seek to master it, nonetheless. Others still are driven by a desire to one day return to the tribe, bringing lawfulness to the chaos of gnoll existence, shedding the ways of the demons from whence they came. Many adventuring gnolls have been exiled for such musings or for displays of compassion. Mostly, though, those that shed tribal life have been lured by that which lies beyond the periphery of tribal territory, enticed by yet-to-be-experienced wonders. With such backgrounds in mind, you can create characters with racial subtypes and use starting points such as the following:

Adventurer: You are drawn by the rewards, sights, and wonders of the world.

Aligned: You have been raised by a non-evil race, and you are individually repentant and disillusioned by evil.

Desert: Raised among dunes, you know the desert and are especially adept at avoiding quicksand.

Exiled Gnoll: You have been banished by the tribe and seek a new belonging. Your hope is to make amends and, someday, return to your kind.

Forest: Raised in caves among the trees, you know the forest and harbor a deep hatred of those thin pretty clean folk: the elves.

Half-Construct: Lost an arm or leg? We can rebuild…

Magical: These gnolls have greater intelligence and flirt with or have mastered the arcane arts.

Razer: In the name of your demon lord, you spread destruction, razing settlements and any other visages of civilization.

Undead: Having run afoul of ghouls or vampires, you exist between life and death.

Names for your gnoll player character can include or be inspired by the following suggestions:

Look for more of the Gnasty Gnoll series in weeks to come, where I will twist these furry fellows in to new variants for the Midgard Campaign Setting.