Skip to content
Home / Delve into the Depths in the Kobold Blog / Old Hat Monsters: The Encounter 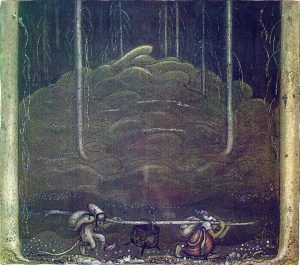 We’ve civilized, mutated, and mashed our classic monsters into a fantasy paradox; they’re familiar yet new. On the horizon I have at least three more monster templates ahead that may well breathe new life into your old favorites, but I must confess that sometimes the best way to surprise your players isn’t to change the monster at all.

The encounter is easy to hand wave. All too often I see GMs simply place their player characters and monsters in the same room, figuring the encounter will sort itself out. It works well in dungeons; mostly the monsters are traumatized or enclosed, and the PCs are likely a food source or a threat, so an immediate fight is a foregone conclusion. As soon as the PCs enter the room, you tell the players to roll initiative and go from there. More advanced GMs will have the monster hidden and have the players make a Perception check against the monster’s stealth to see who is surprised the first round. It all boils down to seeing monster/villain and then fighting.

The advantage to this type of casual GMing is minimal prep work. For some groups, minimizing the roleplaying in favor of getting to the combats is preferred. Also, it’s not uncommon for encounters to be speed bumps to the “boss fight,” so why give those encounters much thought? In video games, this way of handling things is referred to as a grind, and it’s considered lazy design. If you want otherwise mundane encounters to become exciting again—to the point of being something memorable instead of a mere grind—join me after the jump. I’ll discuss some different setups that are both easy to run and a twisted challenge for your players.

The Jack in the Box: A simple way to take an otherwise ho-hum encounter and spice it up is to add a trap or a haunt to the battlefield that the monster is aware of but the PCs may well not be. An example of this could be as simple as having a monster take a withdraw action to flee down a trapped hallway the monster is familiar with. In the heat of combat, caution also might be thrown to the wind, and the PCs could well lose the advantage when they take heedless actions, such as following their foes down this hallway. Another way to spice this encounter up: Consider using a monster that has a movement form the PCs do not, such as a spider racing across the ceiling of our previously mentioned trapped hallway.

Strange Bedfellows: Ecology sections on monsters are actually critical reads. You can come up with all sorts of interesting combinations that stem from ecological convenience. For example, trolls are always hungry. This is partly due to their size and the demands of their regenerative abilities. This hunger drives them to prey on other intelligent races. The vampire, on the other hand, simply needs blood, and troll blood is likely dangerous to it. Why not have the two form a partnership of sorts? Your PCs could investigate local disappearances and find troll tracks, thinking they have the encounter licked. Then, when they confront the troll after making themselves ready for its acid and fire vulnerabilities, the vampire partner summons a swarm or two and rushes to the aid of its troll ally, anticipating a feast ahead for them both.

The Face Routine: A personal favorite of mine uses your classic villain setup. The villain uses Diplomacy checks and good roleplaying to talk it out with the PCs, distracting them from things its minions are doing behind the scenes. As a DM, you can set Perception check DCs beforehand and allow the players to roll as the villain’s minions move into position to throw their big punch. Whether these minions flank all the PCs when revealed (thanks to some fancy footwork or magic), or otherwise gain an advantage in a fight, the key is to get the PCs to drop their guard for a moment—just long enough for the villain to achieve his or her goal.

Protect the Football: I lied—this setup is my favorite. Victory isn’t always about winning the fight. Sometimes it’s about stopping something really bad from happening, and the fight itself becomes a secondary objective. A villain with a hostage about to be sacrificed is the classic example. Getting that hostage clear of the threat is a major objective for the group, and your fighter might decide not to use tactics to evade attacks of opportunity in favor of rescuing the hostage. Another great setup involves the completion of a ritual. If the minions hold your PCs back long enough, the whole fight could change drastically when the main villains complete the ritual.

Do you want to see one of these encounters in action? If so, which setup would you prefer? Let’s see what you want! Comment on this article, including the information requested below, and for the first eight responses, I’ll hop right in with an encounter setup that you can enjoy in your own game. Here’s the information I need from you: (1) Which set-up do you want to see? (2) What CR range do you want the encounter to meet? (3) What is your favorite classic monster? (4) What are your preferred terrain choices (mention 3)? I’ll pull something together based on the responses I receive.