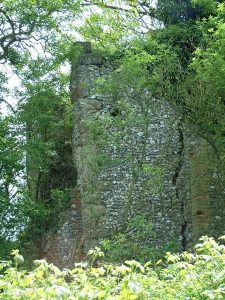 Filled with wondrous creatures and devastating monsters, Midgard holds adventuring challenges no matter where you are on the map. This article presents a short, divisional encounter. Although designed for Midgard—specifically the Northlands—it can be easily adapted to other locales.

An unfinished tower in the wilds is under construction, but at whose command? And what creatures are working on this project? Adventurers have a chance to find out in this encounter.

Mid-sized statues have been stolen from a local sculptor. He has lost five over the past few weeks as the heavy pieces, some partially finished, are dragged out into the wild in the middle of the night. Stones might also be missing from a local quarry, mine, or graveyard.

The party comes across tracks in the glittering frost. On inspection, the tracks reveal someone dragging something heavy. Following the tracks for a ways (DC 15) shows that the quarry is slow moving, stumbles frequently, and doesn’t seem to rest (no campfires or rest breaks). As the characters near the site, they may encounter similar tracks, with slightly different prints dragging large stones to a centralized spot.

The site itself is a small clearing of trees (about three acres) hidden in the middle of the wild. A large pile of stones (gravestones, broken statues, granite blocks, and other large rocks) dominates one side of the clearing. To the north, a mostly dry creek bed dips low into the clearing (trickling water fills this during the warmer seasons) and keeps the surrounding ground damp and muddy. Dirt in the middle of the clearing has been dug out to create a mound in the center, where a partially constructed tower stands. A palisade circles the small tower, many of its stakes rotten and falling over, with large gaps in the circling wall to slip through. Tending to the site is what looks like a small group of zombies.

The tower has one entrance on the second story, which is reached by a ladder that has been sloppily repaired several times. Most of the second story is open, with piles of rubble from unfinished walls and former construction built up on the western side. Similar piles of stone rubble surround the circular wall in places on the ground.

There are an even dozen of the creatures that continue performing various tasks (dragging wood and stone supplies to the site, stacking stones to build the tower higher, repairing damaged walls or the palisade) unless disturbed. The zombies are actually Gengangere, “those who walk again.” If the characters approach noticeably and move into within 15–20 feet of any of them, these creatures drop whatever they are doing and take offensive action (treat the Gengangere as zombies, except that there is a 50 percent chance each round that they go berserk as the rage spell). Otherwise they continue working on the tower.

The creatures were slaves controlled by a gluttonous lord in a mad scheme to build a tower fortress, with the promise of freedom at its completion. The lord died (stroke after a short life of stress and overeating) and most of the thralls scattered. A loyal handful remained behind, determined to finish his last request and to earn their freedom in an honorable way.

Months later, a severe winter weather storm coupled with disease ravaged and killed those who stayed, and their corpses animated due to their undying desire to fulfill their honorable quest for freedom. The undead thralls have been trying to finish the small tower for decades, only recently having run out of stone from a small quarry a few days to the south. Sadly for them, they no longer have the skills for solid construction and, with each passing year, the site falls more into disrepair.

The creatures themselves carry naught but tattered clothes, rotting rope, and a number of ailing tools. Among the piles of rock are several decorative tombstones, statues broken into pieces, and a few slabs of marble.

If left alone, tombstones and large rocks continue to go missing for months, and then suddenly stop. The undead pile stones until there is a sizable (just under tree level) mound and dig a moat around the palisade that eventually fills with muddy water. Several undead fall apart in this endeavor, but then a smarter set of creatures stumble on the location, purge it of the undead thralls, and use the site to create a formidable, defensible base from which they can launch raids against nearby trading routes.

Do you have twists of your own to add here? Ideas for tying the gluttonous lord into your own game? Share them in the comments below!

6 thoughts on “The Broken Tower”