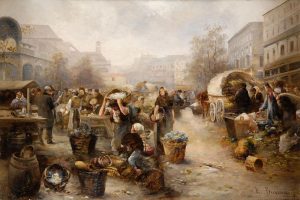 “I… I’m… not really… no! YOU drink it!” stammered Benoit, holding the glass vial bubbling with green muck at arm’s length over the damp cobblestone, a look of disgust on his weathered face.

“Listen—you’re wounded, and we’re low on coin. This is all we can afford.” That was Reynaldo again, snorting as a deft elbow to Benoit’s midriff reminded our warrior of the cracked ribs he’d suffered at the rough earthen hands of Bemmea’s elemental guard days before.

“But… it… it smells. And why is it still warm and bubbling?” Benoit protested again. The others had rarely seen the swordsman turn so pale, his eyes crying out desperately for help from his unsympathetic comrades…

Grovius remained unmoved. “Because the merchant just made it, you dolt! Perhaps next time when a Bemmean archmage’s procession seeks to pass, you’ll pay proper respect. You’re lucky we made it to Maillon ahead of his spectral hounds with you in one piece after the mess the elementals made of you.”

Shoulders sloped in resignation, Benoit sighed before looking up again hopefully, only to meet Reynaldo’s disapproving nod. Giving in, the warrior straightened up, summoned his resolve, and grimaced as he guzzled the smoking concoction. Only a small “urk” escaped his lips as he swallowed it down, a look of disgust spreading across his increasingly flushed face.

The Bottle Market fell silent, only moments before shrouded in a riotous cacophony. Grovius cocked his head as if listening to some far-off cry and then spun to see the stall previously brimming with all manner of cheap concoctions and bubbling alembics suddenly abandoned and empty—as if the stunted, glassy-eyed gnome who had sold them the elixir was never there at all. From everywhere came the probing stares of other merchants and stall-keepers as crowds of customers inspecting goods from among the homemade banners and ramshackle storefronts inhaled expectantly. From all sides came their wide-eyed stares.

“What the hell is… everyone… staring…” Benoit’s stomach convulsed violently—obvious even under his armor—and he struggled to maintain composure. “It tasted terrible but… really… it… I…”

A small scar on the warrior’s cheek, long carried from a childhood brawl, suddenly winked open, revealing a watery, bright blue eye beneath. It blinked again and peered around excitedly. Another opened along a crease on his forehead. The wrinkle at the corner of his mouth hosted another sprouting eye, as did his marked crow’s feet. Before he could draw breath again, a dozen or so eyeballs blinked across his face’s right side, the orbs gazing excitedly in all directions.

“You know, I… I can SEE you all looking at me!” Benoit seemed oblivious to the change and pulled down his collar as if to catch breath as a small tentacle the length of a child’s arm wiggled from beneath his breastplate. “Yeeeaaaargh!” screamed the warrior, as more tentacles writhed and slithered from beneath his armor, reaching up toward his face. He struggled to undo the straps holding the armor to him, when the sudden realization sunk in that the tentacles were not some accursed creature from the Wastes attacking from beneath his armor but, rather, part of him.

By the time Reynaldo and Grovius had dragged the passed-out warrior out of the Bottle Market and back toward their inn, the potion’s side effects had faded, and Benoit’s warped form turned back to normal, his ribs now healed.

“What should we tell him when he wakes up?” teased Reynaldo.

Grovius snickered. “Just tell him not to get hurt anymore. There’s always more cheap healing to be found in the Bottle Market.”

Since cast out of Bemmea for their transgressions over a half-century ago, the alchemists of Allain have made their home among the filthy canals, flooded cobblestone streets, and stilted stone manors of Maillon: the City of Alchemy. Struggling to remain above the swamp’s sucking mire, the city plays host to all manner of experimental breweries, fleshwarping distilleries, and mad master chymists. Adventurers needing solace from the horrors of the Western Wastes often seek out the Bottle Market—Maillon’s central bizarre for strange brews and unusual concoctions unregulated by the chaotic mess of Maillon’s Chymist Guild. But let the buyer beware!

Potions purchased in the Bottle Market are often attractive to desperate adventurers due to their steep discounts, and while most stand a good chance of working as they should, almost all carry unintended side effects with a wide range of implications on consumption. Some can suck the spells right from a mage’s memory or cause inadvertent levitations. Some do not work immediately when consumed, only to have their users sprout wings or grow barkskin hours after consumption. Others cause strange mutations of extra eyeballs or writhing tentacles while even rarer unguents have wholly positive effects, with increased stamina and magical effects well beyond that of the price paid.

Fortunately, few effects are ever reported as permanent, and even the most afflicted imbibers—whether sickened or mutated—returns to normal in a matter of minutes, the lessons of the Bottle Market well-learned, and the buyer’s suspicions of a good deal too good to be true now keenly alerted.

The Wasted West is rolling full steam ahead, with ongoing discussions on the region now focusing on the last remaining magocracy to survive the Great Mage War that resulted in the Western Wastes. The cities therein—and the mages who rule them—are yours to shape and create! Want to help shape a world? Join the Midgard Campaign Setting Project.

7 thoughts on “The Bottle Market of Maillon”