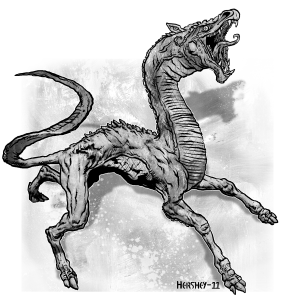 Coiling like a living corkscrew, moving with a scraping hiss, a serpentine form skates nimbly across the ice on long curving claws, maw agape and stinking of a hundred graves.

Ensnaring snakes, glima worms, skittering tongue of the linnorm, river-walking writhing skaters… There are countless kennings for the lindwurm, for these dragons infest the northern wilderness year after year. When winter comes and the breath of Boreas freezes the land, they glide into Trollheim and Jotunheim, following the course of frozen rivers and lakes. When spring’s warmth returns, they retreat into the icy tundra of the Bleak Expanse, only to return the following winter with a determination and infallible homing instinct that’s the match of any salmon…

Lindwurms have long serpentine bodies and crocodilian jaws, but they skitter overland on spindly limbs. Their talons are long and curved, doubling as skates or short skis when moving over ice. Few things are swifter on the ice. Semi-domesticated lindwurms serve the inhabitants of Geskleithron, City of Ice, pulling yeti war-sleds and carrying Boreas’ ice mephit cavalry into battle.

In the wild, lindwurms hunt in groups, roving between breaks in the ice looking for breaching whales and seals, or incautious skraeling fishermen. They employ wolf-pack tactics and enjoy surprising foes with their more than animal intelligence. They prefer to skate by their prey at speed, snapping a bite as they pass or snatching up small or medium enemies with their grappling tail. Battles between lindwurms and the north’s white dire bears are legendary: a powerful omen for ice-dwelling priests and shamans.

A Craft (scrimshaw) check (DC 20) turns a pair of lindwurm claws into a set of masterwork skates. Up to three sets of claws can be salvaged from each creature.

Runic Blood (Su) Lindwurms have an innate connection to the rune isaz, which governs ice, imprisonment, and paralysis. They possess the monster feat Runic Blood (Isaz) as a bonus feat. (See Northlands for runic powers.)

Snake Belly (Ex) When lying prone with its sensitive stomach on the ground, a lindwurm can sense approaching creatures by the vibrations they cause. Although not as effective as true tremorsense, this grants a +4 bonus to Perception checks.