Skip to content
Home / Delve into the Depths in the Kobold Blog / Advanced Feats: Feat of the Week 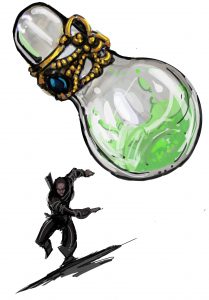 You can use a sling to fire splash weapons at your enemies.

Benefit: You may launch thrown splash weapons using a sling instead of tossing them by hand. The attack remains a touch attack but range and attack bonuses are as if using the sling rather than the thrown item. In all other respects; such as damage and affects, treat the splash weapon as if it had been thrown normally.

Special: Alchemists bombs are considered thrown splash weapons for purposes of this feat and can be “created” as part of the attack after the bomb flask is “loaded” into the sling. When using other types thrown splash weapons you may treat them as ammunition when using this feat; allowing you to retrieve them as a free action and then load them into the sling as a move action.

Example: Vlad Boomski the halfling alchemist decides to fling a bomb at his foes. He first takes a move action to load his +2 sling staff with a bomb flask. Then he spends a standard action to make an attack with the bomb with a range of 80’ and with a +2 enhancement bonus to his touch attack roll from the staff. If he hits, he rolls his bomb damage normally as per the rules for thrown splash weapons.

This feat was inspired by the alchemist class so they can hurl their bombs with a sling. None the less, I always ask myself, “How can I make this feat apply to as many characters as possible?” Since bombs are treated as thrown splash weapons, I keyed the benefit to that, instead of to bombs specifically.

With the idea in hand, I needed to look at the mechanics. The benefit is that you can hurl the item farther than the standard 20 feet and you can apply weapon enhancement bonuses and feats to your attack. While that is handy, it comes with a downside in that you have to spend a move action loading the sling. I felt it was important to add more benefit so I specified that the enhancement bonus from the weapon applied to the attack roll. The question arises, what about damage? Since splash weapons don’t all deal normal damage I wanted to sidestep that issue and specify that other than the range and accuracy, all other factors were as if you had thrown it by hand. It’s always good to ask yourself challenging questions when making a feat and cover them as best and succinctly as you can.

The sling loading mechanic also had another challenge. Firstly, bombs are “created and thrown” as a standard action, so how do you load something in a sling that doesn’t yet exist? I created a special section to explain how this should work keeping to the spirit of the rules. This led me to remember that pulling a flask was a move and then loading the sling is a move which leaves no action to fire it. Making this trick take more than one round was a no go. Reading the rules for readying weapons I found the loophole I needed, the clause stating ammunition is drawn as a free action. Specifying that a flask loaded into a sling is ammunition solved the dilemma.

Finally, to tie the whole thing together and to remind the reader that this worked with the sling staff, I crafted an example to demonstrate how the feat works. Generally if you see an example it means the author had doubts that the feat would be fully understood on a first read.

One thing to watch out for is how this combines with Fast Bombs, or more to the point, how it doesn’t combo. Fast bombs will let you launch as many bombs as you have BAB for in one round, but the need to load your sling for each shot will limit you to one when using this feat. At the moment, there is no pathfinder feat that lets you load a sling as a free action. Of course finding and solving these problems is what feat writing is all about!

4 thoughts on “Advanced Feats: Feat of the Week”