Skip to content
Home / Delve into the Depths in the Kobold Blog / All the Rage: Barbarian Totems (Part 1 of 2) 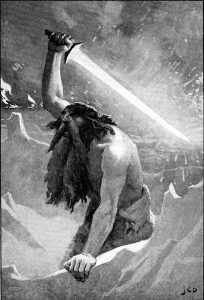 Another man would have given up by now, but Goreg was no ordinary man. His blood pounded with rage-fueled adrenaline, and his nose twitched, catching the sour scent of retreating orc. Goreg bounded forward, his muscular legs driving him through the snow. Each step tore through ice and frost as he closed in on his prey. Knowing his chase was nearing an end, Goreg howled, primal and raw, unable to hold in the fury any longer. He felt like dropping to all fours.

The sensation brought a wolfish grin to his face.

A barbarian caught in the throes of a rage is a terrifying vision. Slavering and wide-eyed, blade twice its size clasped tight, bleeding from wounds deep enough to fell a boar—the sentient creature from moments ago bursts forth as a feral, hulking beast.

Beast is a more accurate term than some would think…

Most are not aware of the spiritual aspect of raging. Barbarians often come from cultures that live off the land, be it windswept tundra, jagged mountains, or dark forests. Isolated from city politics and religions, these clans worship the miracle of unbridled nature. This “religion” manifests in the veneration of totems, spirits of the animals they share the land with. These beasts are revered for their grace and strength. Clansfolk, especially barbarians, strive to attain these qualities as a representation of skill, honor, and devotion.

The bear, falcon, and wolf are merely three of the totems a barbarian may revere. Every totem offers a small background as well as rage powers that fit the totem’s theme. And even their physical fetishes, the objects that focus their veneration, can bestow upon those worthy the primal magic of these creatures.

Barbarians who venerate the bear totem believe that raw strength is the most desirable quality. To emulate the bear in all of its ferocity is to be as close to nature as possible. Followers of the bear tend to grate on the nerves: these robust warriors seek to test their strength often and constantly seek arm wrestling, roughhousing, races, and other competitions.

In addition to these new rage powers, bear totem barbarians often select standard powers that show off their impressive strength: strength surge, knockback, mighty swing, and powerful blow are all choices that fit this theme well.

Strong and Stout (Ex)—You gain a +1 resistance bonus to Fortitude saves for a number of rounds equal to your Constitution modifier (minimum 1). This bonus increases by +1 every 6 levels. The power is activated as a free action and is only usable while raging.

Bear Hug (Ex)—When raging, you may start a grapple 1/day as an immediate action after a successful melee attack. This attack does not suffer any penalties for weapons held nor does it provoke an attack of opportunity. You must be at least 8th level and possess the strength surge rage power before selecting this power.

Ferocious Swipe (Ex)—You may activate this power as a swift action before a melee attack is made. If the attack is successful, you add your ranks in Intimidate to the damage roll. This power is useable 1/rage and you must be at least 12th level.