Skip to content
Home / Delve into the Depths in the Kobold Blog / Review: Letters to Lovecraft 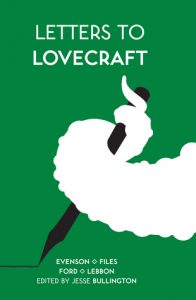 H.P. Lovecraft wrote horror stories, and he developed a mythos that has oozed its way into literary and now popular culture. In recent years, with his popularity growing, many of Lovecraft’s foibles have come into a harsh spotlight. As ugly as some of his foibles are, most of his fans don’t share his views. In fact, they are willing to overlook them due to his extraordinary ability to reach into the darkest recesses of his readers’ souls and find the things that scare them, as individuals or as members of “proper” society. Stone Skin Press took Lovecraft’s essay on horror writing and, in a stroke of madness or genius, asked eighteen authors to take quotes from this famous essay and write stories based on quotes from that essay. Some of these stories are directly influenced but Lovecraft’s quotes, some are written contrary to Lovecraft’s words, and some of the stories use Lovecraft’s words as the entrance to a labyrinth into madness.

I have reviewed several of Stone Skin Press’s books, and I always find it important to mention the physical quality of their products: thick covers, heavy bond paper, smart cover art, and type that seems to be just the right size and font. Even the premade crease in the covers make their trade paperbacks more durable and thus re-readable. When handling one of Stone Skin’s books, I feel like I’m holding something special. I won’t say it feels like a tome, but it is close. As wonderful physically as Stone Skin’s books are, their content is worthy and often surpasses the physical. Beautiful on the inside and out.

Stone Skin Press is a young publisher with fresh ideas, and they are more than willing to take niche topics and bring them forth. In the past few years, there has been a spate of Lovecraft-inspired stories and collections. Letters to Lovecraft takes a very different approach to Lovecraft. In a very odd way, this book felt like a really cool English assignment rather than the standard challenge authors who are part of an anthology are presented with. Rather than just writing a Lovecraftian story, these authors had to dig much deeper: they had to embrace Lovecraft’s essay and the observations held within it, then create something magical. And they did.

I’m not going to review all eighteen stories, but I will highlight a few that got to me. The first was actually the first story, “Past Reno,” written by Brian Evenson. This story took a part of our country that, while desolate, is well known. Not all of the desert is the same, but the creepy expansiveness of it combined with the more mysterious and even mythical aspects of road trips combined for a story that felt more Lovecraft than some of Lovecraft’s stories. The simplicity in which Evenson approached this story caused me to do most of the heavy lifting on the fear side, and that single aspect is one of the things that draws me most to Lovecraft.

“Help Me” by Cameron Pierce was a whale of a fish tale. It really wasn’t that long, but the edges of something that more than meets the eye were there right from the get-go. The ocean has always kept its secrets held close, and this tale brought one of those secrets right up onto the shore.

The last story that I will mention is the story “The Trees” by Robin D. Laws. Whew, this one was so twisted, it seemed normal. Laws went for a much odder angle to Lovecraft. The motivations behind the acts within the story came off as genuine. Also, the build-up to the climax really set a mood. The feeling of being left out of an inside joke, or not knowing what was behind the green door, was pervasive. I found much goodness in that story.

These are just a few stories that I loved—if given more time, I think I would eventually mention some outstanding aspect of each story in this book. Jesse Bullington deserves mad props for the editing job on Letters to Lovecraft. None of these stories felt forced or typical, and all of them were unique and sodden in blood and mystery. I do feel that a basic understanding of Lovecraft’s works adds to the flavor of this collection, but even those who have not peeked beyond the veil can appreciate this one. Bravo, Stoneskin Press, and bully to you, Bullington!

1 thought on “Review: Letters to Lovecraft”