Skip to content
Home / Delve into the Depths in the Kobold Blog / Expanding Codex: Ziphius 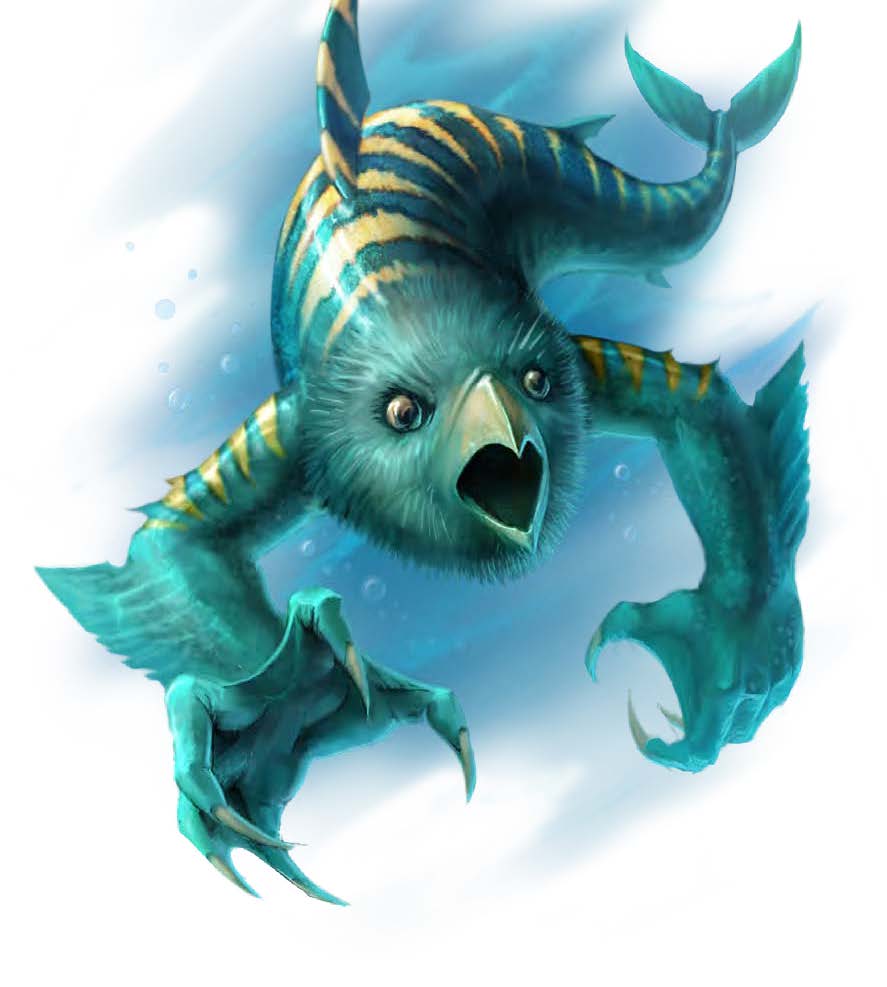 The following changes allow GMs to alter a ziphius without modifying its challenge rating:

Capsize. If the ziphius moves at least 20 feet straight toward a seagoing vessel and then hits and damages it with a dorsal fin attack on the same turn, the vessel capsizes. A creature that can steer or otherwise control the vessel can prevent it from capsizing with a successful DC 16 Strength (Athletics) check. If the craft is larger than the ziphius, the creature has advantage on this check while a creature on a vessel smaller than the ziphius has disadvantage on this check.

The ziphius does not possess the Charge ability.

The ziphius’s swim speed is reduced to 40 ft. A coastal-dwelling ziphius is smaller than its deep-dwelling relatives, measuring no more than 45 feet long, but it retains its gargantuan size.

Large Stomach. The ziphius can have up to two targets swallowed at a time. When it takes 20 damage or more on a single turn from a creature inside it, the ziphius must succeed on a DC 13 Constitution saving throw for each creature it has swallowed at the end of that turn or regurgitate the creature, which falls prone in a space within 10 feet of the ziphius.

The reach for the ziphius’s Dorsal Fin attack is reduced to 5 ft.

The following magic item and spells are inspired by abilities possessed by a ziphius:

Helm of the Slashing Fin

You can use the attack action to make an attack with the fin topping the helm, which deals damage as a great axe. You are proficient with the slashing fin. If you move at least 20 feet straight toward a target and hit it with the fin on the same turn, the hit is a critical hit.

This gold amulet holds a preserved eye from a ziphius. It has 3 charges. As a bonus action, you can speak its command word, which expends 1 charge, and choose one creature within 60 feet that you can see. The target must succeed a DC 15 Wisdom saving throw; on a failed save, you create a temporary mental bond with the target until the start of your next turn. You can choose to gain advantage on attacks against the target or cause the target to have disadvantage on attacks against you. The amulet regains all expended charges daily at dawn.

You subject one creature you can see and within range to the pressure of the deep seas. The creature must make a Strength saving throw; on a failed save, it is restrained and takes 2d10 bludgeoning damage. On a successful save, the creature takes half damage, and the spell ends.

A creature restrained by this spell can make another Strength saving throw at the end of each of its turns. On a failure, the creature is restrained and takes bludgeoning damage as above, and the damage increases by 1d10. On a success, the creature takes half damage and can move at half speed. The spell ends when the creature successfully saves against this spell twice; the successes don’t need to be consecutive.

A willing creature you touch becomes destructive. Until the spell ends, if the creature hits a target with an unarmed strike, the hit is a critical hit.

At Higher Levels. When you cast this spell using a spell slot of 3rd level or higher, you can target one additional creature for each slot level above 2nd. You can imbue a single weapon with this spell in place of two creatures.

This spell imbues a bribe you present to a creature with an aura of friendliness. If the creature willingly accepts the gift, it regards you as a friendly acquaintance for the spell’s duration. Alternatively, you can suggest a course of activity as per the suggestion spell, but you do not need to concentrate on the spell.

This spell doesn’t affect a creature that can’t be charmed. If you or your companions harm the creature, the spell ends.