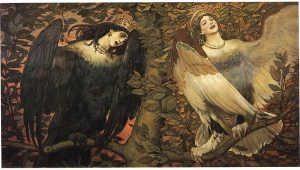 The following Margreve creatures reuse the statistics of existing creatures (see Pathfinder Roleplaying Game Bestiary and Bonus Bestiary), presenting a new experience for those unfortunate enough to encounter them.

Arboreal Colossi (CR 11) are living engines of destruction used only when the forest’s spirit feels deeply aggrieved. Not truly “alive” in the way that treants or awakened trees are, they are direct manifestations of the Margreve’s wrath. Treat as colossal animated objects…

Blackroot Worms (CR 3) are many-headed balls of worms and slime that erupt from the undergrowth. They strike from the ground and the soil. Treat as young hydras.

Bog Titans (CR 9) are aquatic giants, preserved and strengthened by their time spent in the fens and bogs of the Margreve. They overturn small watercraft and breathe a deadly tannic acid that eats skin and leather alike. Treat as dragon turtles.

Briar Horrors (CR 6) are green-skinned, vaguely humanoid creatures, wrapped in brambles. Their gaze unnerves those who look into their walnut eyes. Treat as kytons, except with thick, thorny vines for dancing chains.

Cernenn (CR 4) are large monstrous humanoids with elk heads. Known as the bane of the alseids, legend tells of the first cernenns rising from the underworld to balance nature against the birth of the first alseids. They navigate thick forest mazes and bring death and fear to the deer people of the Margreve. Treat as minotaurs.

Choking Spirits (CR 2) live under rotted swamp logs and underwater throughout the Margreve. They have too many claws and are known for strangling creatures near lake shores, sometimes at the behest of nearby rusalki. Treat as giant crabs.

Cocooned Corpses (CR 5) are the desiccated remains of creatures wrapped in the cocoons of giant spiders. Horror and death throes animate the corpses, which break free from their parent web and attack the living, especially those who failed (or never tried) to save them from their fate. Those in their presence feel the fear and horror of the creature’s long death. Those struck suffer the poison of the spider bite. Treat as mummies, except with spider poison instead of mummy rot.

Creeping Willows (CR 4) have listened too long to the sad songs of rusalki swinging on their branches. These willows wander the forest in search of young men to strangle and drag back to their pale maiden friends. They move slowly when unobserved, and little distinguishes them from regular willow trees until it’s too late. Treat their entangling, strangling branches as Huge advanced assassin vines.

Fallen Treants (CR 3) look like rotted logs with a few stunted branches for legs. Shelf mushrooms, galls, and parasitic ants complete the old log camouflage (+10 racial bonus to Disguise in forest). Sap-like acid drips from a hollow (their mouth) at one end. Their tunnels snake and merge under the Margreve floor. Treat as ankhegs.

Firebirds (CR 5) look like flying bonfires of brightly glowing, red, orange, and yellow plumage. Lost feathers lose their radiance, but plucked feathers remain as bright as a continual flame, so long as they remain outdoors and above ground. Treat as half-celestial advanced giant eagles.

Floret Queens (CR 7) are humanoid plants whose heads are a spray of enchanting but toxic flowers. As beautiful as a nymph and as deadly as a medusa, their sweet pollen brings weakness and blissful paralyzation (as medusa poison but requiring only a touch attack), while their gaze compels nearby plants to entangle an enemy, infest them with floral life energy, and transform them into mindless saplings. Treat as medusas.

Kindly Ones (CR 2) look like glowing fireflies that drive away goblins, whisper demons, and other nightmares of the forest. They never speak and never reveal their purpose before they recede into the night. Those saved by a kindly one are considered worthy of divine favor, and judicial tests for their intervention have saved more than one condemned man. Treat as lantern archons.

Mandragoras (CR 1) are tiny vegetable servants created by treating mandrake roots with blood and herbal lotions. These verdurous homunculi are created by druids and witches, who use a dog (or an unwitting human servant) to pull the mandrake from the ground and so avoid its lethal scream. Treat as homunculi.

Margreve Shadows (CR 6) emerge from the deepest hollows of the forest. Their flitting, elongated forms and terrible screams wither the courage of even hardened heroes. “Flee if the wind does not blow but shadow flow” is the byword of the scarred victims who have survived. Treat as shadow mastiffs.

Nettle Storms (CR 3) are whirling clouds of leaves that burn when they touch hands, faces, or any exposed skin. They are especially common near fires set by charcoalers or woodsman. The cumulative effect of the burning rash can be deadly. Treat as wasp swarms.

Petrified Treants (CR 3) are long-buried trunks of the Margreve’s fallen that rise again to fight for the forest. These nigh-invulnerable soldiers march through the forest armed with their sharpened branches to enforce the Margreve’s will on visitors and residents alike. Treat as caryatid columns.

Quagmen, or Moss Trogs, (CR 1) have muddy, rubbery skin, covered in deep green moss. Their heads are vaguely reptilian with dark twig fangs and hollow obsidian eyes. Their moss attaches to the skin of helpless creatures, budding flowers and transforming the hosts into newly formed quagmen in 1 day. Treat as troglodytes, except with the implant ability of the xill.

Sap Covens (CR 5) are formed when sap demons spend too long in too many possessed bodies. Fragments of their hosts’ souls crystallize in their sap, and the Margreve rejects them as tainted. These forsaken eventually gather at the outskirts of the woods, where they merge into an oozing gestalt mass. Treat as gibbering mouthers, except their spittle contains sharp amber stones and their ground manipulation affects dense flora rather than earth and stone.

Shivering Maidens (CR 5) have vulnerable voices and slender forms. Their torn shirts hide two pairs of vestigial arms. They call from behind trees, and poison those they touch. Treat as phase spiders.

Sirin (CR 4) have the body of a giant owl and the head and breasts of beautiful women. Their captivating songs draw victims into the woods and into their talons. To escape their captivating songs, victims have the option to repeat their Will save. Failure devastates the victim’s mind, however, as if by the feeblemind spell. Treat as harpies.

Swamp Fires (CR 2) occur when young genius loci coax swamp gas from rotting underwater vegetation, set it on fire telekinetically, and give it a life of its own. Whether for sport or defense. Treat the fires as aquatic thoqqua, except with a swim speed instead of a burrow speed.

Whispering Demons (CR 3) are alien mutterings that take form and flight in the deep Margreve. They drive mortals mad although rumors claim that those who survive their touch gain strange insight into the numinous forest. Treat as allips.

Whittlers (CR 8 ) are skinny treants with crumbling bark, often found among tree stumps whittled into odd humanoid forms. They gore and trample intruders and breathe a green mist that turns targets into petrified wood, which they whittle into more pleasing forms. Treat as gorgons.

Wintermen (CR 4) are emaciated creatures of cold and ice who emerge each winter to purge weak trees and animals from the forest, carpet the underbrush with frost, and lay traps of slippery ice around neighboring villages. They have also been known to stuff incautious children into sacks and carry them to some terrible end. Fortunately, even mild spring warmth drives these hairless creatures into hibernation beneath the ground. Treat as yeti.

11 thoughts on “25 Reskinned Creatures of the Margreve”