Skip to content
Home / Delve into the Depths in the Kobold Blog / Dante’s Demonology: Pluto, the Accursed Wolf 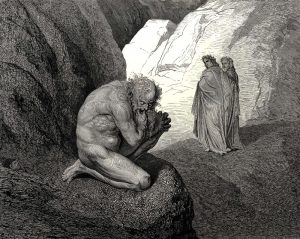 Warlock characters with fiends as otherwordly patrons are perhaps the most common among their peers. Archdevils and great demons are as numerous as the sins of mankind, and the first part of the Divine Comedy, which describes hell in great detail, presents many of them, including Charon, Minos, Flegiàs and others. In the following, Pluto, the guardian of the Avaricious and the Prodigal, is described, together with the wicked powers he bestows to his warlock cultists.

“Pape Satan, pape Satan aleppe,”—began Pluto with his clucking voice. And that gentle Sage, who knew everything, said to comfort me, “Let not thy fear hurt thee; for whatso power he have shall not take from thee the descent of this rock.” Then he turned to that swollen lip and said, “Be silent, accursed wolf! inwardly consume thyself with thine own rage: not without cause is this going to the abyss; it is willed on high…” (Divine Comedy, Inferno, Canto VII)

Pluto is one of the most ancient aspects of Hades, the Greek god of the underworld: he specifically embodies greed and excessive wealth and, at a minor extent, the (distorted) relationship of man with material richness. His form is not well known: Virgil calls him “accursed wolf,” but in all the Divine Comedy the wolf image is used as a metaphor for greed and envy, so it could be only an epithet.

Warlocks who forge a pact with Pluto are characterized by the following special qualities. Not all of them have in-game effects, but the cosmetic ones are useful to better describe a warlock focused on avarice and lust for gold.

Improved Pact of the Chain: You can choose a vulture or giant vulture as familiar—the bird that steals the last resources to starving victims without mercy. 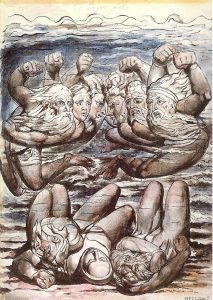 Greedy Pact of the Tome: Your Book of Shadows is formed by blood-signed contracts and payment notes belonged to individuals condemned to death or slavery for unpaid debts.

Control Gold: When you use the Golden Lions Figurines of Wondrous Power, they can become a lion for up to 2 hours (instead of the normal 1 hour).

Golden Resilience: When you use the Fiendish Resilience class feature, all your body becomes covered in scales made of fool’s gold (pyrite). This effect is not easily concealable, but damage from silver weapons does not ignore your damage resistance.

Power of Wealth: If you know the Beguiling Influence eldritch invocation, you have advantage on Persuasion rolls when you use gold or precious materials to bribe people.

The Prodigal: When you choose the Carousing downtime activity, you can obtain a bonus on the Carousing roll if you spend additional money. You obtain a +1 bonus to the roll for every 10 gp you spend, up to a maximum of +10 (100 gp).