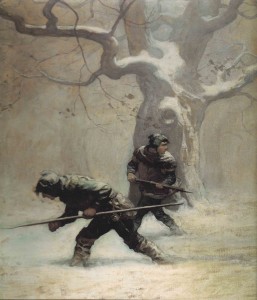 In Kobold Quarterly issue #20, you’ll find quite a bit of archery-based fun awaiting you. One of the articles, “The Elven Archer” by John E. Ling, Jr., provides you with a Pathfinder-based archer. We’re going to take a look at both a player’s point of view for the class, as well as a GM’s take on having it in his game.

When I was asked to play this character class, I was a bit leery at first. I played rangers all the time. Something always seemed to be missing after a while, the character got boring, and I wouldn’t want to play any longer. In fact, before I started playing the elven archer, I had stopped playing for about seven years. Now, Jillian, my archer and my favorite character, is retiring, and I am really upset.

The archer class, as set forth in the description in the article, is fun to play because he or she is more flexible than most other character classes. You have the obvious combat skills at a distance. But the class is so much more than just skills with a bow. The character, when played with finesse, strengthens the nonranged melee combat and bolsters areas of the party due to the skill points provided for the class. The extra skill points allow you to gain experience doing reconnaissance, which rangers get only in certain situations. In our party, my character was called upon to do much of what a rogue does. With her skill set, Jillian completed many missions that a normal ranger could not do!

When we made characters back when our game started, Jeannette told me she wanted to be sneaky and shoot things in the face. Hard. Okay, maybe those weren’t her exact words, but close enough. So we started off with ranger, which she liked. But she also realized that she could grab some fighter levels to get more feats into the character, and rogue would give her sneak attack—perfect for shooting things hard in the face. And, since this was back in 3.5, there were also quite a few prestige class options that gave nifty benefits. So, rather than struggle through the multiclassing, I decided to build her a class that did what she wanted.

When running Jillian through encounters, it was really pretty nice. She was, far and away, the most consistent character at the table. A lot of that, of course, has to do with how the dice fall. But, by and large, I could pretty consistently estimate in my head how much damage Jillian would do in any given round. I could then use that information to balance out the encounters, either by adding more creatures or toughening up somebody—or, sometimes, both.

Outside of combat, Jillian brought several other talents to the table. One of the big ones was her tracking and wilderness skill, which the party used quite a bit. Her stealth ability coupled with her Spot and Listen (since turned into Perception) made her an ideal scout for the group, too. She was stout enough that she could move ahead of the group, and if things went bad she could take a hit or two before the rest of the party arrived. Except against the ghost assassin . . .

All in all, I found the character to be fantastic. She had exactly the skills the player wanted, and she was capable of contributing to the group dynamic in and out of combat. Hopefully, you find the class equally as enjoyable as we did!

You can snag your copy of Kobold Quarterly issue #20 today!

8 thoughts on “A Look at the Elven Archer”