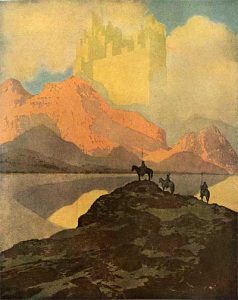 Leaning casually against the edge of the balcony opening, the lion-headed rakshasa peered at the heroes with yellow cat-eyes.

Gunnar stepped forward, hefting his thrice-blessed axe. “Foul creature! We shall free this land of your evil touch!”

“DO WE HAVE GUESTS, BHUKASTA?”

The booming voice crashed down upon them as a massive face appeared beyond the balcony. The titan, human in form but bald and gargantuan, grinned at them all.

“Not guest, great Gamka,” Bhukasta replied with a drawl. “Intruders.”

“WELL THEN,” Gamka thundered, his grin growing even wider. “THEY MUST DIE.”

Be they dark entities, Sith lords, or rival archeologists, villains remain at the heart of any great adventure. For the Southlands, we created enemies ranging from minions to dark heroes to ultimate opponents. In this preview, we thought it best to show you our favorite antagonists. Take a peek, then visit the Southlands Kickstarter to learn more about this project.

At the moment, Brian’s favorite villain is the titan, Gamka, and his rakshasa vizier, Bhukasta.

Having spent millennia as a prisoner in the sea-god Nethus’s realm, Gamka has returned to the Southlands with the singular goal of rebuilding his people’s long-lost empire. Owing his freedom to Bhukasta’s assistance, the two rule over the lion kingdom of Omphaya, slowly building up an army of leonine and human warriors.

Gamka is one of those great villains who does not seem to realize (or perhaps care) that his actions could be seen as “evil.” In fact, the titan endears himself in the hearts and minds of his people by taking an almost childish delight in virtually every aspect of Omphayan life. He helps farmers move boulders or aids a community to remove some unwanted beast or carefully plays with small children. Yet, he also works to force the other Southlands nations to accept him as their ruler. A being out of time, Gamka routinely eats those who displease him, something perfectly acceptable millennia ago, but somewhat reviled now.

Where the Omphayans honor and worship Gamka, Bhukasta remains an object of fear and suspicion—a reputation the rakshasa actively promotes. Juggling a thousand dark plots and long-ranging schemes, Bhukasta works to arrange the fall of the other Southlands kingdoms while advancing the blood-hungry worship of his goddess, Taravi the Devourer. Whether building up Omphaya’s army or guiding the Vizier’s Guard to root out any hint of rebellion at home, Bhukasta sits at the center of an intricate web of plans poised to change the Southlands forever.

For Ben, his favorite villain is the ruler of Lignas, Mwato Yaav, known as the Lady of Vipers. Mwato Yaav and the Unwilling Council, along with her secret magical society, the Coil of Memory, offer a great monolith of a foe.

Why? First, there is simply the mental image of the fierce sorcerer queen, communing with the skull-bound ghosts of previous rulers and rivals, pulling counsel from her greatest enemies and predecessors as she schemes and plots, all while remaining vigilant against the ritual assassination used as the method of succession in Lignas. Just the ferocious gaze of the research image I found keeps me inspired. Second, the escalating level of intrigue possible with the Coil and its servants, the hidden magics of Lignas, and the supernatural and spiritual servants of the Lady of Vipers all provide great potential for an extended, ongoing campaign set in the regions south of the Crescent and Sarklan deserts, possibly offering another front against the traditional power of Nuria Natal. The ambitions and desires of the Lignans and their ruler mean they may expand the scope of their operations to the north and to the east, beyond the Abandoned Lands and even into the markets of Mhalmet, Shibai, and Zanskar.

Mwato Yaav offers up a foe just waiting for a reason to pick a fight. She’s the kind of enemy who, upon hearing the Nurians know how to master the leylines and achieve Godhood, would stop at nothing to conquer the kingdom of the river and achieve this ascension herself while seizing anything she could find about leylines. This drive, combined with Lignas’s cultural imperative to claim new magics and acquire powerful secrets, makes the queen and her agents an exciting antagonist with immense potential.

4 thoughts on “Antagonists of the Southlands”