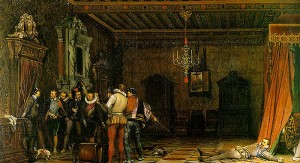 Elder Frankston was obviously one of the most respected men in town. When he walked down the street, people always nodded their heads in greeting. When he entered the tavern, people always cleared a stool at the bar. He seemed like a trustworthy source of information and a useful merchant contact. We had no idea he was responsible for the Endwin murders a decade before.

House Redclaw is a sprawling merchant affiliation. On the surface, they buy, sell, and transport rare goods. In this capacity, they have agents and offices in many cities, including some surprisingly remote.

This is just a cover for the larger organization and their main source of income—assassination. The Redclaws have been around for so long that this has become a well-known secret among the upper class and other merchant guilds…

The Redclaws started as a group of families who worshiped red dragons. Once their practice was discovered, they were driven from the community into exile. They soon found they could not scrape a proper existence alone in the wilderness and travelled to the next town. Claiming to be traders, they sold their final possessions.

The various families spread, continuing the ruse until it became true, and slowly, they came into a bit of wealth. Many of them never forgot their tormentors, however. At night, in the dark corners of their new homes, they honed their blades until the day came when they struck back.

It became known as the Deathslit Purge. Every member of the town was found dead with but one visible killing blow. Those who examined the bodies determined it must have been weeks after the event that a House Redclaw trader happened upon the town and “discovered” the scene.

The core members of House Redclaw have been assassins since birth. They’re trained to feel no remorse for their actions, and they act with blind precision. To them, it’s not murder; it’s just another business transaction.

Newer members are accepted into the house but rarely know more about the organization than they must for the mission at hand. Once they’ve been involved in enough foul business that there’s no backing out, they may be invited into the fold and taught the Redclaw’s secrets.

Some members of the house still worship red dragons as gods. These individuals quickly become quite dangerous, especially in positions of leadership, as they are further corrupted by the draconic influence. Mad with greed, these men gather secret hoards and take extraordinary means to protect them. They also become territorial, seeing new merchant groups and even personal questions as punishable by death.

Having grown to such wealth, some members of House Redclaw are simply merchants, having no knowledge of the other activities going on. They may become innocent victims or even helpful NPCs to heroes interacting with the house.

Leadership within the organization traditionally comes from those who can trace their bloodline to the original families. Due to the nature of Redclaws’ work, members sometimes rise in the ranks in less traditional ways. It is not uncommon for a member to suddenly gain favor after a particularly successful transaction or for eligible candidates of an open leadership position to meet with sudden accidents.

The very first interaction with House Redclaw will likely come when the PCs need to buy and sell some treasure. They are an excellent source for unloading unusual items or as buyers when the local economy alone would not normally support such a transaction. The friendly old man at the Redclaw trading desk may even become a favored friend of adventurers, offering a smile and keen interest when they return from their quests.

House Redclaw can also be a source of quests for the players. Early missions would be comparatively mundane in nature, such as protecting a caravan or retrieving a lost item. Later, the PCs may be sent on an assassination, either knowingly or under the guise of finally defeating an enemy who has been evading justice.

The most obvious relationship with adventurers is as adversary. House Redclaw’s true nature is revealed and the adventurers try to put a stop to it: first locally, then taking on the leadership of the organization. This could span a whole campaign if desired, with important assassinations to get to and stop before they happen, trying to convince people of House Redclaw’s real activities and trying to track down key members. It may even lead to the lair of a red dragon.