Skip to content
Home / Delve into the Depths in the Kobold Blog / Divine Favor: the Druid 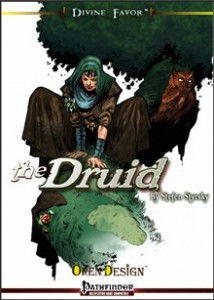 For those who think of druids as tree-hugging new age hippies or noble savages, we direct the reader’s attention to the movie The Eagle. Early on, a Roman soldier stationed in Britannia tells his new commander that there’s cause for worry: a druid has been seen in the local villages. This is very, very bad news for a lonely outpost of civilization at the edge of the forest. And not to give anything away, but it soon becomes evident that these defenders of the empire have reason to be afraid.

For the vast expanse of the natural world gives those who channel its forces powers as infinite as nature itself. Divine Favor: the Druid, the second in our PDF series for the Pathfinder Roleplaying Game, offers players new options for the druid’s wild shape ability, animal companions, and druid builds for shamans who revere a primal element or a particular aspect of nature. Also included are five new domains and several new feats. Clerics and rangers can also benefit from the new domains and options for animal companions.

Following a helpful overview on building and playing a druid, the book presents two new options for wild shape: nature’s multitude (in which the druid gains the ability to turn herself into a mass of animals and back again once per day) and swarm shape. Your druid can take advantage of new options for animal companions including flock companion, wild speaker (giving an animal companion the power of speech), and soul companion, which allows a druid to transfer her soul temporarily into her animal companion’s body. Speaking of animal companions, druids can now really freak out their more civilized fellow-adventurers by hanging out with brain oozes, electric lizards, and green slugs. (Nature ain’t always cute and furry.)

The druid archetypes section presents the Moon Druids of life, death and transformation; the Greenmen, protectors of the woods; and the Elemental Shamans of earth, air, fire and water. Druids, clerics and rangers can take advantage of new domains such as Hunting, Transformation and Insects, and the book wraps up with a variety of new feats for the druid and her animal companion, including Defend the Master, Healing Tongue and Primeval Counsel.

Pick up Divine Favor: the Druid in the Kobold Store and unleash the primal forces of nature!

7 thoughts on “Divine Favor: the Druid”