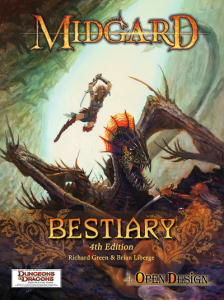 Wolfgang asked me to pick a couple of my favorite monsters from the Midgard Bestiary to write about as a preview. This was pretty hard to do since there are so many cool monsters in the book, but after some deliberation, I went with the ghost boar of the Ringwood and the derro fetal savant.

The Bestiary started off as a 4E thread on the Midgard Campaign Setting patron forums on koboldquarterly.com in which Brian Liberge and I were active participants. After some discussion about what rules elements we wanted to convert to 4th Edition, we settled on monsters, and both of us started posting our conversions of 3.5 and Pathfinder Midgard creatures.

The ghost boar of the Ringwood was the first new creature I wrote, and I was inspired by a sentence or two in an early draft of the Seven Cities chapter of the forthcoming Midgard book. The original plan was for it to go into a KQ article written by Brian and myself, but soon after we’d finished writing it, Wolfgang suggested doing a 4E Bestiary, and so the ghost boar has ended up wedged between the gearforged and the ghost riders of Marena.

Not actually a ghost or even undead, the ghost boars were once common dire boars given fell magical powers by Charon the Boatman, God of Death. Dangerous and aggressive, they attack outsiders entering the Ringwood, and some say that a mysterious group of avengers, belonging to the Order of St Gerita, have trained a number of ghost boars to serve as protectors. 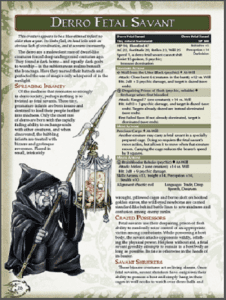 The derro fetal savant first appeared in the closed Open Design patron project, Halls of the Mountain King, a fantastic adventure set in the Ironcrag Cantons and written for both 3.5 and 4E. The creature was conceived in the fevered brain of Brandon Hodge and converted to 4E by Ben McFarland. We didn’t need to do much to the monster for the Bestiary, just tweak the damage numbers to bring them in line with the latest recommendations on damage by level.

It is, quite simply, the most disturbing D&D monster I have ever come across. A premature infant derro, babbling insanely, and with the power to possess an opponent’s body, is carried into battle in a gilded cage on the end of a hooked staff to sow confusion and madness among the derro’s enemies. When I ran the adventure, the derro fetal savant totally creeped out my players. I’ll guarantee it will creep out yours too!

Check out the Kickstarter for the 4th Edition Midgard Bestiary.