Skip to content
Home / Delve into the Depths in the Kobold Blog / Book Review: The Wraith-Bearing Tree by James Enge (A Tournament of Shadows, Book 2) 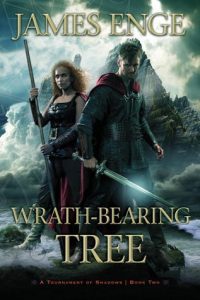 Fate and Chaos are fighting again. These two mysterious powers have decided to go on a killing spree, and their chosen victims are the little gods that permeate the land of Kaen. The people of the Wardlands, just across the Narrow Sea, fear that this wave of deicide could be the precursor to a Kaenian invasion of their country. With this in mind and a little internal treachery, Vocates Aloe Oaij and Morlock Ambrosius are dispatched to Kaen to find out just what Fate and Chaos are up to and to defend the lands they have sworn to protect as Graith of Guardians. After yet another at-sea disaster, the two guardians must confront and often kill many frightened gods. They must even face a murderous dragon who has been promised much power if he delivers the head of Morlock to the two powers (Fate and Chaos). If this wasn’t enough, they must fight a demon summoned by none other than Morlock’s absentee father, the necromancer Merlin. Oh yeah, and love is in the air…

I was glad that this book was broken down the way it was, but it almost could have been listed as more of a collection of interrelated quests rather than a single book. Enge is a student of history and is well versed in the legends surrounding Merlin and his ilk. I think he tried to capture this and, in 90 percent of what he did, he was spot on, but rather than breaking the book into five parts I would have preferred to see it broken into several novellas. This storyline reads like the old epics, and the title of the book ends up being misleading because of it. This book is called The Wraith-Bearing Tree, but said tree is really mostly in the beginning of the book and mentioned later on, but it isn’t important enough to be the title, so I almost felt misled. One other complaint I have about the book is the cover. The cover illustration is well done—an eye catcher—and it made me want to read the book. The problem I had is that Morlock looks nothing like his description; the guy on this cover looks like he could double on a bodice ripper, not the crooked-shouldered almost anti-hero that Morlock actually is. He is an amazing character and part of his amazing comes from the fact that he isn’t dashing. The guy on the cover actually lessens who Morlock actually is.

I really enjoyed reading this book. A Guile of Dragons was my first encounter with Enge and Morlock, and while I liked that book, this one felt more fluid and really let me get to know Morlock better. He is a man of few words and many thoughts. He is one of those characters that is full of surprises, but isn’t surprising. Enge didn’t make Morlock a super hero or even an anti-hero—he made him a normal-minded guy in extraordinary circumstances with some amazing abilities. Morlock always uses those abilities in non-self-serving, practical ways. Even with his gruff manor, his lack of pride makes him very likeable, even loveable. In fact, love is a recurring theme in this book, and throughout the book Morlock’s love for and with Aloe was interesting to watch.

Enge did get a little Penthouse Letters with a few descriptions of initial couplings, but after that things settled down a bit. I think he could have cut out a few details, and the acts that were performed would have seemed more like acts of love and affection rather than pornographic. The love interest parts of the book didn’t detract from the overarching story—in fact, they enhanced it. I can see where the sex scenes would appeal to many readers, but the language used and their almost graphic nature hardened them rather than conveying what I think was Enge’s true intent. One thing that these scenes did show was that Morlock is a giver.

The love scenes were not the only times during these stories that Morlock proved this, but in love I think it really hit the spotlight. Morlock is such a contrast to his father Merlin, and watching this play out toward the end of this story was lots of fun. I expected each of them to act the way that they did, but that didn’t detract from the Jerry-Springer-like interactions that they had. Aloe was no slouch herself; she came in just right. She was tough, but not too tough; she was smart, but not oversmart; and she did plenty of really “manly” things while maintaining her femininity. She didn’t feel like a character just thrown in to get more female readers or to appease feminists. She had her ups and downs, but she felt real, and she is most definitely someone I want to read more about. I hesitate to say that she is an emotional foil for Morlock, because too often that is exactly what some female characters are used for. I think saying she is the polar opposite of Morlock would almost do her more justice, but in many ways they are much closer emotionally than it seems. They both feel passion, they both get angry—they just express it in very different ways.

This is a fun Odyssey-like story. It harkens back to the epic tales of old, with supernatural parts that got a bit strange a bit quick, but Enge is an expert on tales from the Merlin cycle and his ability to adapt them to this format is no small feat. I enjoyed his hints at this story taking place in a world that might be long after ours, but still being fantastic. This is a good book, with very interesting characters, that will keep you reading long past lights out.