Skip to content
Home / Delve into the Depths in the Kobold Blog / D&D’s 40th Anniversary: Words to Celebrate, Part Four 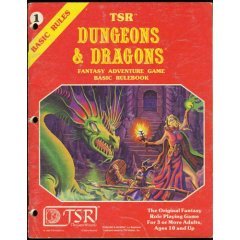 It’s hard to believe that Dungeons & Dragons is celebrating its 40th anniversary this week! To help commemorate this most glorious occasion, we asked several folk who are working in or who have worked in the RPG industry to share their memories of the game with us. Due to more such folk wishing to share their memories, we have a final part to this series. Enjoy!

Lenny: Moldvay’s 1983 red box basic set. I originally got into fantasy gaming through Joe Dever’s Lone Wolf books, a kissing cousin to the Fighting Fantasy books. I learned shortly thereafter that I could do the same kind of stuff with other kids, and pretty much that was that.

What’s your favorite piece of crunch, flavor, art, or text from that edition?

Lenny: The cover. That image is so iconic to me, cutting right to the heart of the game’s premise. I remember thinking of it as a promise and a siren call. “This, right here. If you’re into this, open the box.” I still feel that way, twenty-something years later.

Lenny: Not sure if this is the answer you’re looking for, but the quirkiest thing to me was that no one had really settled on what D&D was at the time. There was no linear progression of editions. Moldvay was out, and Advanced D&D was out, and people were hacking bits and pieces of them together, and people were porting stuff from Arduin, Dragon, Judges Guild, and Polyhedron. So every table I sat at was different, and everyone had their custom-built combination of rules. It took me a while to realize that the presence of the name “Dungeons & Dragons” on something didn’t tell me as much about what experience I was about to have as I thought it would. I’m not sure if that’s a good thing or a bad thing, to this day. Probably a little of both.

Lenny: These days, it’s usually Dungeon World, Green Ronin’s Dragon Age RPG, or a hack of the Leverage RPG from Margaret Weis Productions. On the d20 side, I go with Green Ronin’s True20, because it’s super flexible for modeling different character concepts, but still gives me the “zeroes to heroes” progression thing I like in D&D.

Todd: Whichever one consisted of three or four pamphlets in a white box.

Todd: If I could figure out where it’s hidden I would answer that question. I haven’t seen it in decades.

Todd: The tiny scale of it. A few pamphlets—8-1/2 x 11 folded in half. So few rules. D&D itself is quirky. The idea of adding a few rules to “make-believe” so that we could keep playing as adults, with consensus, was mind-altering.

Todd: The flavor in which you paint covers and write novels, but don’t actually game much at all. Ever. Sad face.

Ari: Depends how you want to count it. The first edition where I created characters, rolled some dice, made up some stories, was Basic (Moldvay Red Box). I was, however, a kid with no clue what I was doing. When running a module, for instance, I gave the map to the player (singular) as a visual prop, and just ran the areas in numerical order.

The first edition where I actually played the game more or less as intended, and vaguely by the rules, was 2E Advanced.

What’s your favorite piece of crunch, flavor, art, or text from that edition?

Ari: Honestly? I think the example of play. In both Basic and in 1E Advanced, I found those to be among the most evocative parts of the rulebooks. (I STILL want to know what happened to the poor halfling thief who got dragged off by ghouls in the 1E DMG.)

Ari: Well, given that it was early D&D, I’m tempted to say “the edition.” But even as a kid, I always thought it was weird that races—elf, halfling, dwarf—were also classes. That never quite sat right.

Ari: I haven’t had a lot of opportunity to play lately (sniffle), but I’m about to hop into an online Pathfinder game. Other than that, I’d love to get into both 13th Age, and—for the first time in a long while—I’m waiting to see what’s going on behind the curtain in terms of development on D&D Next. It’s kind of fun, treating it as a hobby/pastime again.