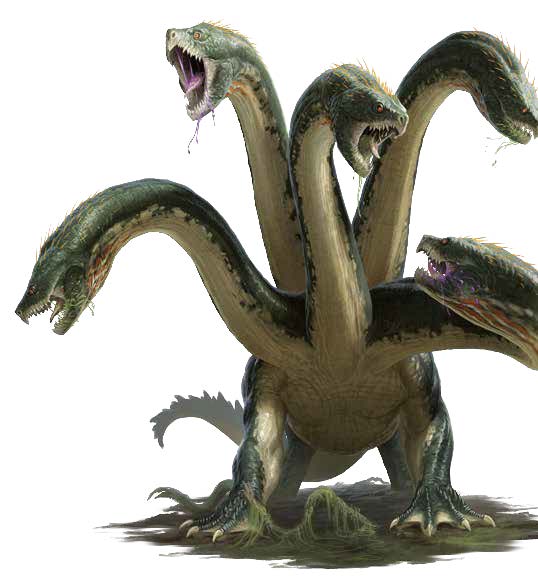 Five reptilian heads upon long necks rise from the murky surface of the water. Sizzling venom drips from each gaping maw.

The venom maw hydra lurks in sulfurous swamps and near areas of high geothermal activity, poisoning the hot springs and lakes where it dwells.

Voracious Appetite. The venom maw hydra takes advantage of the sanctuary its warm water home promises to nearby fauna, devouring any creature that comes for warmth or a drink and leaving desolation in its wake.

Deadly From Afar. Quick reflexes and the ability to spit vile secretions at range let it strike from the safety of its watery home.

Amphibious. The venom maw hydra can breathe air and water.

Multiple Heads. The venom maw hydra has five heads. While it has more than one head, the venom maw hydra has advantage on saving throws against being blinded, charmed, deafened, frightened, stunned, and knocked unconscious. Whenever the hydra takes 25 or more damage in a single turn, one of its heads dies. If all its heads die, the hydra dies. At the end of its turn, it grows two heads for each of its heads that died since its last turn, unless it has taken cold damage since its last turn. The hydra regains 10 hp for each head regrown in this way.

Wakeful. While the hydra sleeps, at least one of its heads is awake.

Multiattack. The venom maw hydra makes as many bite or spit attacks as it has heads.

Venom Spray (Recharge 5–6). The hydra sprays caustic liquid in a 30-foot cone. Each creature in the area must make a DC 16 Dexterity saving throw, taking 22 (5d8) acid damage on a failed save, or half as much damage on a successful one.

Tail Lash. When it is hit by a melee weapon attack within 10 feet of it, the venom maw hydra lashes out with its tail. The attacker must make a DC 16 Strength saving throw. On a failure, it takes 7 (2d6) bludgeoning damage and is knocked prone. On a success, the target takes half the damage and isn’t knocked prone.

Wallowing Rampage (Costs 3 Actions). When the venom maw hydra is in water, it wallows, causing the water to hiss, froth, and splash within 20 feet. Each creature in that area must make a DC 16 Dexterity saving throw, taking 14 (4d6) acid damage on a failed save, or half as much damage on a successful one.