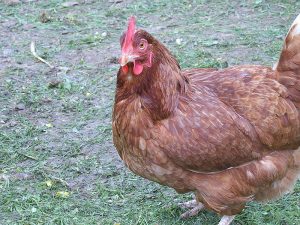 It was at the county fair that I witnessed a debate over what manner of beast had done the most for the common man. A merchant claimed it was the sheep, with its wool and meat. A rancher offered that cattle—descended from the mighty aurochs—could pull loads heavier than a horse and provide meat or milk.

The crowd was satisfied until old Iludar the Wise was brought into the discussion. “Nay, for a ewe needs a dog to tell her of danger, and a man could naught afford beef on his plate ‘cept for festivals and celebrations. The mightiest of nature’s gifts to the common man… is this.” And with that, he smiled and held up a single hen’s egg.

The humble chicken is a surprisingly versatile beast. Its eggs provide ready protein for peasants and yeomen, and a farmer can cook fowl for the dinner plate more often than larger animals. Beyond that, it can serve as a pet, a sentry, a familiar, and even a companion to druids…

SPECIAL ABILITIES
Egg Laying (Ex) An adult hen in a comfortable nest has a cumulative 40% chance/day of laying a single egg.

Poor Flyer (Ex) Chickens cannot perform long-distance flight, and—after any round a chicken flies—it must spend the next 1d3 rounds on the ground. Chickens use the withdrawal action to fly to put distance between them and a threat.

A famous but expensive and rare breed known for a keen intelligence and perky personality, the araucana lay blue eggs and have unusual blue-white legs regardless of feather color. They are resistant to cold and have ear “tuffs” that improve their hearing.

An ancient breed of chicken originally bred for fighting, these small ornamental chickens are smart, lean, and surprisingly strong and tough. Although the males often fight with other roosters, aseel roosters and even hens are sometimes kept as guards when a dog isn’t available.

Although once disliked by farmers for being moody and having strangely colored eggs, these deep black chickens are hardy. When properly cared for, they are among the best egg-laying chickens in the world. They’re also decently meaty.

Superior Egg Laying (Ex)—An adult australorp hen has a cumulative 80% chance to lay an egg on any given day. This replaces egg laying.

A stately breed that matures slowly, it’s both a tasty roasting fowl and a decent egg-layer. They’ve fallen out of fashion with farmers, except up north, where their innate sturdiness against cold is a valuable asset.

Cold Endurance (Ex)—A brahma can thrive in temperatures down to 0° F without needing to make a Fortitude save and receives a +2 circumstance bonus on saves vs. cold environments and effects.

This large, fluffy ornamental breed comes in a variety of colors and is loved by queens and commoners alike. The Cochin is an intelligent and easily handled breed sometimes compared with lap dogs. These chickens make excellent foster parents for other breeds of chicken or even other species of fowl.

Poor Laying (Ex)—An adult cochin hen has a cumulative 20% chance to lay an egg on any given day. This replaces egg laying.

Base prices for adult chickens

Felaril’s Fowl Elixir: Invented by an alchemist who raised ornamental chickens as a hobby, when given daily during the first 4 weeks of a chicken’s infancy, this alchemical nutritional supplement promotes toughness and resiliency, resulting in maximum hp for the chicken’s first HD. It cannot be used on adult chickens or augmented chickens such as familiars or animal companions. Chickens treated with the elixir are still edible though it makes the meat unusually tough.

Although Felaril intended it to improve the lives of ornamental and guard chickens, it has sadly been adopted by those who use chickens for blood sport, and many owners are willing to pay for “elixir-bred fighters.” Felaril’s Fowl Elixir can made with a Craft (alchemy) check against DC 15. Cost: 15 gp

Fighting Gaffs: These metal spikes replace a rooster’s natural talon spurs, increasing the damage on their talons by one step. Although some adventurers use them, sometimes even getting masterwork versions for their feathered companions, most are found in the blood sport of rooster fighting. Cost: 2 gp/pair.

Some ornamental breeds of chickens serve as familiars to sorcerers, witches, and wizards. These follow the ordinary rules for familiars, and a chicken grants its master a +2 bonus on Perception checks, and +4 when making opposed Perception checks against creatures using the Stealth skill. If the master is 7th level or higher, a chicken familiar can speak with birds, as if a hawk, owl, or raven.

Some druids prefer guarding farms instead of forests, and these domesticated druids take a chicken as a companion as a sign of their preference. A chicken uses the bird entry with the following exceptions. It retains the chicken’s 30 ft. fly speed but does not have the poor flyer ability, and it has Alertness as a bonus feat instead of low-light vision. Equipping a chicken companion with fighting gaffs stacks with the Improved Natural Attack (talons) feat.

Yum! Chicken is a tasty tradition for any Thanksgiving meal. (This message brought to you by the Turkey Council.)

19 thoughts on “Chickens of Fearsome Power”