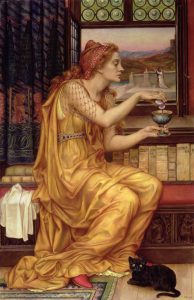 For every successfully enchanted sword, there are a score of sputtering failures. A ring of great power must have several nearly mundane cousins—more suited to a smelter than a wizard’s finger. Sometimes your party’s actions deserve a reward that is heavy in flavor but light in power. Today, Prepared! brings you two items from the catalog of not-quite-right magical treasures.

Opening a small hardened leather case, you discover a single light blue square of silk cloth. Folded carefully to display the emblem of its former owner, the cloth appears to be slightly damp. Unfolding the square makes it apparent that the cloth is cut in the shape of a handkerchief. The cause of the handkerchief’s continued dampness is not obvious.

After suffering a series of tremendous losses, a wealthy baron grew tired of drying his tears with damp handkerchiefs. The baron commissioned the renowned Jastrix the Attemptor to create an enchanted cloth that could absorb the baron’s many sorrows. The enchanter made several unsuccessful attempts before being removed from the baron’s court. The weeping handkerchief is one of Jastrix’s failures. Rather than being eternally dry and absorbent, the small square of fine silk is forever wet. Just shy of dripping, the object cannot be dried by any mundane means. It produces approximately four cups of potable water a day, which can be squeezed from it with a successful DC 10 Dexterity-based skill or ability roll. Successful DC 10 Intelligence-based skill or ability rolls reveal the nature of the magic. The moisture from the object does not transfer to other surfaces, and so it can be stored without fear of soaking other items.

You hold between your fingers a wicked thorn with a trace of dried blood on its point. As you investigate the strange barb, you hear an unending, cacophonous tune playing faintly.

Nixrub the horn blaster was famous among goblin-kind for his inspiring musical compositions. It was proven at the battle of two ponds that goblins who listened to Nixrub’s piece entitled Fish and Cats and Screams were less likely to flee combat. Goblin leaders at the time agreed that each goblin warrior required access to the song, and so they set their wizards to the task of recording and distributing the musical masterpiece. In the end, Fugsten the Repugnant created the goblin listening device. A hardened thorn was enchanted to record the song and play it repeatedly at low volume. The thorn could be driven into the flesh near a goblin’s ear, and thereby rally the warrior constantly. Unfortunately for the goblins, the thorn caused a number of fatal infections and numerous cases of permanent madness, so the production and use of the device declined. Holding the thorn to the ear and listening to the entire composition imbues the listener with a one-time boost of courage; the listener receives a +1 to all saving throws against illusion-based magic for one day.