Skip to content
Home / Delve into the Depths in the Kobold Blog / Your Whispering Homunculus: The Admirable and Seldom Encountered Art of Dwarven Infused Ale 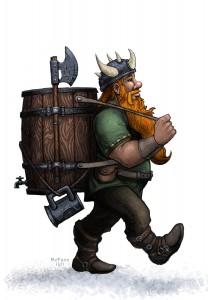 Master Pett’s Your Whispering Homunculus presents only the finest in British gaming. Indeed, you are not likely to find a more comprehensive assortment of miscellany anywhere.

“Another failure. My attempts to recreate the ancient recipes and techniques of dwarven infused ale have failed again.”

“Why do you attach such import to so small a thing master?”

“Because, mouldlet, I wish to learn. No… more than wish, need. The ancient art may be useful to me in my researches…”

The ancient and admirable art of infusing ale with special properties is one that has been practiced by dwarves for centuries. The combination of a (generally) tasty and pleasant drink with a tangible benefit is one that pleases dwarves, who have never shared their secrets with any other races. The ancient art is passed on by word of mouth, and though many normal dwarven ales have been copied (particularly by halflings), the true art of infusion is one only dwarves know.

To become an ale infuser is a commitment to the art of brewing, and one that requires a special feat to master.

Through study and dedication, you can brew ale specially infused with unusual properties.

Benefit: You can brew an infused ale that duplicates the effects of those on the attached list. Brewing an infused ale takes 1 day and requires a successful Profession (brewer) check (DC 25). When you infuse an ale, you must have a sufficient quantity of normal ale (any ale will do although, by tradition, dwarves frown on the use of non-dwarven ales) and have access to a special still which costs 25 gp and weighs 4 lb. Creating an infused ale uses up raw materials that cost 1/2 of the base price.

Infused ale is taken by the quart, and its effects last for 4 hours, taking multiple doses of infused ale does not stack the effects (although dwarves often do so anyway). When taking such ale, the imbiber must make a Fortitude save (DC as listed) or take the damage indicated for the duration of the infusion.

For more information on drunkenness, see the Pathfinder Gamemastery Guide.

All the ales listed below cost 5 gp/quart. This list is not exhaustive, nor does it take into account those master infused ales created by revered dwarf brewers and which are rumored to have considerably greater effects.

Infused ale effects are alchemical in nature, not magical.

8 thoughts on “Your Whispering Homunculus: The Admirable and Seldom Encountered Art of Dwarven Infused Ale”