Skip to content
Home / Delve into the Depths in the Kobold Blog / Real Steel: Yakuza Razor 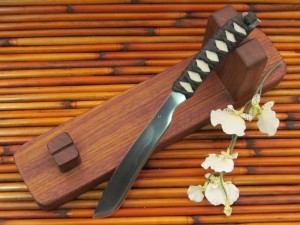 One of the many cool things about bladesmithing is that if you come up with a new design or even a twist on an older one, you get to name it. While recurves are nothing new—and even Japanese recurves have been done many ways—the overall pattern of this knife, to my knowledge, has never been done before.

Sometimes, as with this knife, I start forging without having anything particular in mind. Part of the creative process is to think less and just do. It involves transferring control of the hands—and therefore the hammer—from the conscious, logical part of the brain to a deeper, simpler, more creative part. This part of the brain doesn’t think with words; it instead holds a cloud of concepts.

For this knife, I charged the creative part of my mind with two concepts: elegance and lethality… 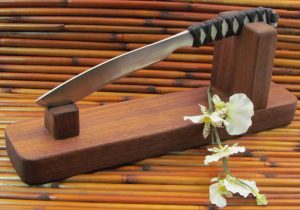 The razor started as a round bar of 5/8” W1 steel. The “W” stands for water quenching (though I quench it in oil), and the “1” indicates the formula #. “1” is a common form of W steel although “2” is making a comeback. The formulas are very simple and similar with W2 having some vanadium, which makes it tougher and more easily manipulated into forming a complex hamon.

I started by striking the tip while rotating the bar, forming a point. I then used my hydraulic press to flatten the bar and create the initial profile. I refined the profile by hand hammering—by this time, knowing I would be making a recurve. Next is the forging of the bevels, but this presents a problem with a recurve: as the bevels are forged the spine is forced backward, and a recurve is supposed to bend forward. I counter this effect by frequently forging small adjustments, forcing the tip down over the horn of my anvil. When the forging was done, I normalized and annealed the steel, refining the grain structure and softening the steel in preparation for hardening and grinding.

Since I’ve done a good job forging, the rough grind didn’t require much more than removing forge scale and touching up the profile and bevels. This knife was differentially hardened, using a clay application along the spine resulting in a hamon which can be seen in the accompanying pictures. As always, tempering follows hardening to draw back the steel to a usable hardness, followed by final grinding and polishing.

Can You Stand the Handle?

The razor has a fairly traditional Japanese handle treatment: stingray skin underlay and black cotton maki (wrap), which is impregnated with a phenolic resin to harden it and hold it in place. This is purely an art knife, never intended to be carried, so instead of a sheath, I made a stand from black walnut.

I think it came out OK. What do you think?

As always, your questions and comments are most welcome!