Skip to content
Home / Delve into the Depths in the Kobold Blog / Exorcism Enhanced, Part 3 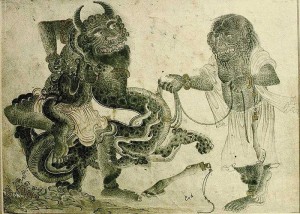 In the first part of this series, Charles began exploring exorcism in the Pathfinder game and provided us with the cost of failure. In part 2, he took us into the commandments exorcists can use, as well as how to handle true names. This time, he provides you with some options that allies might have for assisting an exorcist, as well as some useful spells.

Although exorcists do not channel energy, they often have allies that do.

If channeling is maintained for multiple rounds without interruption, it weakens the demon. For every 2 continuous rounds of channeling, the demon suffers a cumulative –1 sacred penalty to all saving throws and skill checks. This penalty lasts 1 hour after channeling ends.

The turmoil of holy and unholy energy meeting within the victim’s body causes intense pain. Even cooperative victims uncontrollably thrash and squirm. In addition to pain, the clash of energies sometimes does actual harm to the victim.

Tainted items appear unharmed at first glance, but subtle alterations to the markings or words drastically change its meaning. Tainted items are useless for channeling or divine focusing.

Demons despise the sound of prayer. In cases of possession, the sound of people praying inflicts suffering and weakness upon the demon, causing a –1 penalty to its saving throws and skill checks.

To be effective, the prayers must be clearly audible to the demon. The demon’s weakness vanishes immediately when the prayers are no longer clearly audible. Naturally, demons do their best to silence or simply drown out prayerful voices.

The target’s body becomes a prison for all souls or spirits currently inhabiting it. Exorcisms automatically fail, and demons cannot voluntarily end their possession by leaving the body. Imprisoned souls/spirits are released only by the death of the target’s body.

Some exorcists care more about defeating demons than they do about saving victims. Exorcists use this spell to trap the demon so it will share the victim’s death when the victim is slain.

This spell also protects the target from soul-extracting magic such as magic jar.

This spell does not force a demon to manifest itself; it simply provides an opportunity. Most demons will leap at the chance, but some must be coaxed.

If cast upon someone who isn’t possessed, this spell acts as a deep slumber spell.