Skip to content
Home / Delve into the Depths in the Kobold Blog / Book Review: Ashes of the Tyrant by Erin M. Evans 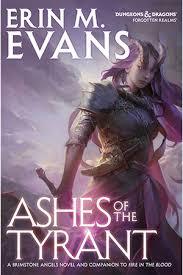 In the fourth book in the Brimstone Angels series, Erin M. Evans continues to tell the story of her iconic tiefling twins and their struggles within the Forgotten Realms and the gods that influence them. After the war that was the cause of the Sundering, Mehen, the twins’ adopted father, has been called back to his dragonborn clan and his home city. He has been cast out and is considered clanless, and he must confront the leadership not only of his former clan but the city’s leadership as well. Upon arrival, a clutch of teenage dragonborn are brutally ripped apart while performing some type of ritual in the catacombs below the city. Upon investigation of this mysterious ritual, the twins discover a summoning circle that looks all too familiar to them…

The story in this novel is more of a murder mystery/political intrigue/getting to know the dragonborn story than a sword-and-sorcery conflict novel. Evans hasn’t sold the huge amount of books that she has just based on her cool fight scenes. She does those well, but it is the complex interaction between her characters and their interaction with the world surrounding them that has been the secret to her success. The nature of this novel plays to Evans strengths, though there were times when things got too complex and confusing.

The twins Farideh and Havilar are young women, and in this novel, they experience many of the emotions that young women living in a magical fantasy world with demonic heritage might have. As characters, they keep growing, but at times it feels like their growth is getting stunted. If Evans isn’t careful, these characters could fall into the wash-rinse-repeat cycle that long-running characters in most epic series fall into. Additionally, at some point, the balancing act with the two lovers in Farideh’s life should be resolved. Right now it isn’t bad, but too much more and these books will start coming off as a young adult soap opera rather than a high magic fantasy.

As as series progresses, more characters will jump into the pool. What is normally one of Evans’s writing style strengths—developing ancillary characters so they come alive—creates a situation where I did not find myself caring about them as much in this novel due to the number of characters. So, given the epic scale of this series, there comes a point where some 3-D characters should be toned down to 2-D so that the story’s pace doesn’t slow down.

In this novel, we find out that in dragonborn society, people go by a given name and a clan name, and Evans used them interchangeably. Realistically, I can see that this would happen often, but, as a reader, when a character that hasn’t been introduced before this point is referred to by given name at some times and then the clan name at others, things can get confusing. I think this really detracted from the story. Add the complexities of the Draconic tongue, which Evans had her characters use for cursing, and things get muddy quickly.

The actual mystery/intrigue part of this story is pretty good. It will keep you guessing, though you never feel so far away from the answer that you give up trying to figure it out. The combination of the mystery and the guided tour of life as a dragonborn will appeal to a wide audience. If you play D&D, especially 5th Edition, this book can really help you with the roleplaying side of running your dragonborn. Wizards of the Coast included both the dragonborn and the tiefling in the Player’s Handbook, which reinforces my belief that this series will not conclude anytime soon.

In short, if you like your mystery and intrigue combined with some teen-type angst, you should devour this book. If you are looking for a conclusion to this series, you’ll have to stand by. This story can give you a great insight into the previously mysterious lives of dragonborn, and the interaction between the Nine Hells and the Material Plane are second to none. Minus the points I brought up earlier, this is a solid contribution to this series, and no doubt this will be followed by many more installments. I predict that these characters will have a shelf life similar to that of many of R.A. Salvatore’s characters. Now let’s see if Evans’s already proven writing skills are up to making it seem like these characters are not kept around past their expiration date.