Skip to content
Home / Delve into the Depths in the Kobold Blog / Monster Monday: Sorcerous Soapberry 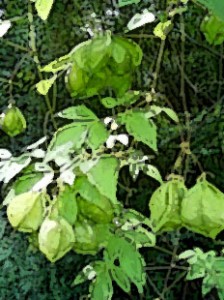 Lurking within the woods, and sometimes used by those who despise magic, the sorcerous soapberry can serve you well when you want to give any nonspellcasting NPCs an advantage in an area. Come take a look at what this vine can do.

The sorcerous soapberry, also called the spell-eating balloon vine, grows in temperate woodlands and along the banks of marshy waterways. Though some herbalists prize the lush vine for its pale white flowers and its large, hollow (and very intoxicating) seed pods, the plant is despised by spellcasters everywhere. Indeed, the plant is dangerous only when exposed to magic. Though it ignores most creatures, the presence of magic causes the plant to animate and seek to leech all magical auras.

SPECIAL ABILITIES
Balloon-Berries (Ex) In 2d6 rounds after sprouting, the vine’s pods are released into the air. They drift with any wind, or otherwise float in a random direction for 1d6x10 feet/round, until they encounter an obstruction (such as a character, a wall, or a tree). Upon contact with such an obstruction, they explode, showering the immediate area (10-ft. radius) with seeds and a misty toxin. Picking the pods before the plant releases them prevents the subsequent explosion.

Poison—Balloon Berry Vapor type inhaled, save DC 17, frequency 1 round for 6 rounds, effect 1d2 Intelligence damage and 1d2 Wisdom damage, cure 1 save. The save is Constitution-based.

Magic Missiles (Su) If attacked, the vine retaliates with magical missiles (CL 7), similar in nature to the spell of the same name, except that the plant must make a ranged touch attack to hit. The missiles have a range of 100 feet, are subject to spell resistance, and are affected by any effect that affects magic missiles.

Spell Absorption (Su) When a spellcaster casts a spell within 30 feet of the sorcerous soapberry (but not a tendril), the caster must make a DC 17 caster check or else the spell is absorbed by the vine and has no effect of any sort. This absorption takes place before any spell resistance checks. The DC is Constitution-based.

Spell Healing (Su) If the vine absorbs or leeches a spell or magical effect, it regains 4 hit points per spell level absorbed or leeched. (Cantrips provide 2 points of healing) Any hit points gained beyond the plant’s original hit points instead produce 1 balloon-berry for every 4 extra hit points. Balloon-berries sprout 1 round after the spell is absorbed.

Tendril Growth (Ex) If the sorcerous soapberry detects magic, it begins growing a long tendril root (hardness 5, hp 5) toward the magic it detected. The tendril grows along the ground at the rate of 10 ft. a round until it is adjacent to the magic effect or item, at which point it attacks as a vine, with its 15-ft. reach centered on the square in which it ended its growth. Noticing the growth of the tendril requires a DC 15 Perception check. The plant may grow only one such tendril root at a time, and the tendril ends its growth and movement if all magical auras move more than 100 feet away from both the original vine and the tendril. After a week, unless destroyed, the tendril will anchor itself to the ground near to the point it ended its growth and a new vine will begin growth, independent of the original.

Vines (Ex) Each round, if the sorcerous soapberry plant detects magical effects or items, or if it is attacked, it may use up to two vines (hardness 5, hp 5), including one created through tendril growth, to make a touch attack. If the attack hits, the plant begins to grapple and constrict with its vine.

Spell Leech (Su) Any creature grappled by the plant is subject to its spell leeching ability. This ability functions similarly to dispel magic (CL 7), affecting one spell or item a turn (starting with the spell, effect or item with the highest CL), except that any magic affected by the plant is absorbed into the plant rather than being dispelled.